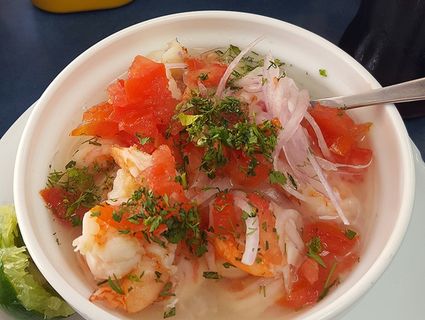 What do you think of when you hear the words "El Salvador"? Crime, gangs, earthquakes, a long war, refugees?

But, El Salvador has a surprise, and it is none of the above. It is gourmet food!

I am a "country counter" avidly trying to reach my personal goal of visiting 150 countries. I am at 107 currently. But to be truthful, El Salvador was not on the top of my list of countries I wanted to visit. It was not that I did not want to go there, it was just that I had not thought about going to the smallest and most densely populated country in Central America.

It was almost by accident that I ended up in El Salvador. I was on a journey through Honduras and Nicaragua with my travel buddies, Renee Pobjecky (a travel writer and immigration lawyer) and Doug Bohannon (an insurance adjuster with extensive travel experience in Central America). Our itinerary included several days in Western Honduras to see the Mayan ruins and horseback ride near the city of Copan Ruinas. Through a series of events out of our control, we ended up with free days in our schedule following our planned-stay in Copan Ruinas. Since we were only 17 mi (12 km) from Guatemala, we decided to add Guatemala to our itinerary; once in Guatemala, we were so close to El Salvador that we could not resist adding it to our itinerary. The idea of visiting Guatemala and El Salvador were spur-of-the-moment decisions made without advanced planning. As such, my expectations for both countries were low, particularly for El Salvador. Boy was I in for a pleasant surprise.

Dinners in El Salvador are late by North American standards, but early by South American standards, and typically are completed by 10 p.m. Our first outstanding dinner experience ended with completely-satisfied customers by 8:30 p.m. on our first night in the Colonia Escalon section of San Salvador. Because it was our first night in El Salvador, we wanted to experience typical El Salvadorian food. But because we had not planned to visit El Salvador, none of us knew exactly what that meant! So we opted for an El Salvadorian buffet recommended to us. Las Cofradias Buffet Restaurant is on Calle del Mirador (Mirador Street) in Colonia Escalon (Telephone: 2264-6148).

All of us were skeptical of a "buffet meal," but a spotless facility, friendly service, helpful suggestions on how to eat local dishes by black-suited servers and over 60 typical dishes served from traditional black pottery made our skepticism vanish along with our waistlines! Our meal ranged from a spicy carrot salad to mains including corn tamales and empanadas, tripe (intestines), dried anchovies, tasty fresh fruit drinks such as raspberry and a full dessert buffet!

Interestingly, the currency of El Salvador is the U.S. dollar. We were done with 8-to-1 Guatemalan Quetzals and 24.40-to-1 Honduran Lempiras when we paid a very reasonable amount in US dollars for dinner at Las Cofradias.

On our taxi ride from Las Cofradias to our excellent hotel, La Posada del Rey Primero, on Calle Dordelly (Dordelly Street) in Colonia Escalon, we noticed the restaurant on the corner at Calle 85a. The light-filled terrace of Beto's Restaurant was packed with well-dressed locals. We vowed to dine there the next evening, and did.

It is a desert-type climate with hot days and cool nights, and we had had a busy day touring museums and monuments. As such, we were all thirsty for a refreshing adult beverage when we arrived at Beto's Restaurant. While mojitos are not typically El Salvadorian, the fresh mint one I ordered equaled or exceeded my South American mojitos. Local beers include the popular Pilsner and the lighter Suprema. Doug enjoyed a Pilsner before trying an unusual concoction that appeared on the menu, a beer and red wine combination. It's flat and heavily alcoholic taste appealed to none of us, and most of the glass remained untouched.

Unlike the one odd drink, all the appetizers and entrees were supreme! One of the joys of traveling with two dear friends is the ability to experience three appetizers and three entrees during one dinner. The shrimp ceviche and shrimp lasagna were my favorite dishes at Beto's Restaurant. For a small country, El Salvador has a long Pacific Ocean coastline which makes seafood popular. Beto's, in business since 1986, does seafood, pasta and meat entrees particularly well. 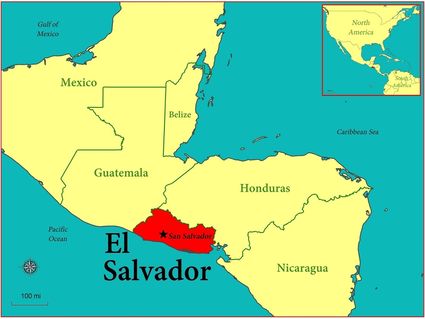 While I recommend San Salvador for its museums and cultural centers, do not miss out on the city's gourmet food in the Colonia Escalon neighborhood!

(c) 2019 - Cynthia Crofoot Rignanese, Esq. is an estate planning, real estate and business attorney practicing law in Lake Wales, Winter Haven and Tampa, Florida, since 1991. She hosts Blogtalk Radio "Globetrotter Gal" and "Lady Lawyer Live." She publishes articles on legal and travel topics. The travel topics include her visits to all seven of our planet's seven continents in publications including International Travel News and Lonely Planet Travel Books. Her Law Firm Motto is "Practicing Law Locally, Thinking Globally!" The Rignanese & Associates Law website is http://www.RignaneseLaw.com and 863/294-1114.