An Oasis of Beauty and Peace Celebrates 90 Years Traveling by car in Central Florida in 1929 wasn't easy. In the late 1920s, many Florida roads were clay. Yet, thousands of cars full of curious people headed to Lake Wales to see the President of the United States and to see Edward Bok's Bird Sanctuary. On Feb. 1, 1929, President Calvin Coolidge dedicated the Mountain Lake Sanctuary and Singing Tower, now known as Bok Tower Gardens.

It was a very rare occasion to see the President in those days. To have the opportunity to see him in Lake Wales was indeed a rarity. It was even more rare for America to receive such a magnificent gift of gratitude from an immigrant. According to 1929 news reports, more than 50,000 people attended the dedication. The experience created life-long impressions, and some in the crowd that day attended the 75th Anniversary Rededication celebration in 2004. With the passage of time, however, none of the original dedication day attendees were among those to help celebrate the 90th anniversary.

Edward W. Bok immigrated to America in 1870 from Den Helder, Netherlands, with his parents and brother. A mere six years old, Edward didn't understand America's language or customs, and he had to help support his family.

Through his outgoing personality, determination and hard work, Edward Bok overcame numerous challenges to become a Pulitzer Prize-winning author, philanthropist, respected humanitarian, champion of social causes and an advocate for world peace and the environment. From 1889 to 1919, he was publisher of The Ladies' Home Journal and made it the first magazine in the world to have one million subscribers.

Edward Bok and his wife Mary Louise Curtis Bok lived near Philadelphia and together inspired a family heritage of philanthropists, educators and socially minded leaders seeking to better the world, including their grandson, Derek Bok, who was president of Harvard from 1971 to 1991.

The Boks wintered in Mountain Lake, an exclusive community near Lake Wales. From his nearby winter estate, Edward Bok often walked to the top of Iron Mountain to watch the sun disappear over the horizon. He became enchanted with the setting and remembered his Dutch grandmother's inspirational words to "Make you the world a bit better or more beautiful because you have lived in it."

In 1922, Edward Bok purchased 14 acres on peninsular Florida's highest point to create a bird sanctuary-an enduring central Florida oasis of beauty and tranquility. "Edward Bok settled in the middle of nowhere to build a somewhere in 1922," wrote the late Paul Lomartire of the Palm Beach Post.

With a wealth far different than that of his boyhood, Edward Bok could afford the "best of the best" and commissioned the finest artisans of the day to fulfill his dream. Frederick Law Olmsted Jr., America's finest landscape architect, designed the garden sanctuary. Olmsted's father designed Central Park, and together they designed the Biltmore Estate gardens. Today, the gardens and grounds feature a combination of meticulously landscaped gardens, sprawling native plant habitats, a wild garden and a delightful array of wildlife, including 126 species of birds that have been identified.

When Bok's garden was nearly complete, he thought it needed a focal point. Remembering the resounding music from the bells of his native land, Bok decided to build a carillon tower and called upon Philadelphia architect Milton Medary to design it. He was president of the American Institute of Architects, designer of the Washington Memorial Chapel at Valley Forge and other significant structures. Medary's 205-foot-tall masterpiece of marble and coquina blends art deco and neo-Gothic designs and sculptural elements depicting Florida's flora and fauna.

Another Philadelphian and one of the most ingenious designers of decorative ironwork, Samuel Yellin created the hand-wrought gates as well as the magnificent Great Brass Door at the Tower's entrance that depicts the Biblical story of creation. Yellin's other works can be seen on the campuses of America's most prestigious universities.

The massive, intricate and colorful tile grilles adorning the openings of the bell chamber are the creation of J.H. Dulles Allen, founder of Enfield Pottery & Tileworks near Philadelphia. He also designed the unique tile floor art of the Tower's first floor to represent trees, birds, animals and fish.

The exquisite Tower houses a world-renowned carillon, a musical instrument of bells suspended in a frame. The 60-bell carillon was created by John Taylor Bellfoundry in England. It's the voice of the "Singing Tower." A carillonneur plays the carillon from a keyboard using feet and hands to create the wonderfully unique melodies.

In 1970, Nellie Lee Bok, daughter-in-law of Edward Bok, led the charge to purchase an adjacent 1930s estate built by Bethlehem Steel Vice President Charles Austin Buck. Originally named "El Retiro," meaning retreat in Spanish, it's now called Pinewood Estate and listed on the National Register of Historic Places. Nestled in seven acres, Pinewood Estate showcases one of Florida's finest examples of Mediterranean Revival architecture and gardens designed by William Lyman Phillips of the Olmsted Brothers Firm. Pinewood exemplifies the winter retreat lifestyle enjoyed by Edward Bok. Although we don't know if Bok and Buck ever met, we do know they had similarities. Both were winter residents of Mountain Lake, both were wealthy men from Pennsylvania and both had a deep appreciation for beauty and nature.

Mr. Bok's intent was, "Simply to preach the gospel and influence of beauty reaching out to visitors through trees, shrubs, flowers, birds, superb architecture, the music of bells, and the sylvan setting."

Many attractions that appealed to visitors 90 years ago have long since disappeared. Remaining relevant in today's world creates major challenges for many National Historic Landmarks and other once highly popular attractions.

In 2011, Bok Tower Gardens' leadership under the judicious and unwavering guidance of President David Price, began to focus on how the Gardens could continue to remain relevant. "It all started with one gift by Edward Bok-his legacy to all of us. We are not just the caretakers of the legacy; we are charged to nurture this legacy into the future," commented board member Cindy Alexander. A capital campaign raised $16 million to transform and preserve the Gardens for future generations.

The landscape architecture firms of Nelson Byrd Woltz along with Coyle & Caron were selected to embrace the legacy of the Gardens while providing a modern vision for the future. They centered on revealing the layers of this legacy space; its history, geology, hydrology, plant communities, wildlife and culture. "We looked to the past to create contemporary and relevant new spaces that transform these areas to a public garden appropriate for the 21st century," stated Thomas Woltz.

Today, Bok includes the magnificent former features that visitors long enjoyed as well as a native plant Wild Garden, a Pollinator Garden, an Edible Garden and an Outdoor Kitchen. The Center for Education and Conservation, a partnership with the University of Florida/Institute of Food and Agricultural Science (UF/IFAS), focuses on the Florida food, culture and nature. Hammock Hollow Children's Garden allows children to immerse themselves in nature, creativity and fun. On one given day, the expression I heard children repeat most often was "This is AWESOME!"

Bok's transformation plan also integrated Americans with Disabilities (ADA) friendly pathways so those with limited mobility and families with strollers could more easily navigate the Gardens.

With the core of the historic Gardens blending perfectly with the new additions, attendance for Bok Tower Gardens has risen dramatically in the past several years. Together, the old and the new features have provided many new opportunities for visitor experiences.

In the midst of today's frenetic world, Bok Tower Gardens continues to fulfill Edward Bok's vision inspired by the words of his grandmother, "Wherever your lives may be cast, make you the world a bit better or more beautiful because you have lived in it."

On February 7, 2004, Edward Bok's grandson Derek Bok said, "If my grandfather were here today, he would rejoice, as we rejoice, in seeing a Sanctuary more beautiful than he left it, more active in its good works than he conceived it, yet continuing as a place of quiet contemplation and repose for people eager for a respite from a world even more fevered and hectic than the one he knew. Surely, he would say, 'My cup runneth over.'" After much planning and hard work in the last several years to preserve the Gardens for the future, I think Edward Bok would proclaim those words now more than ever.

Whether meandering through the gardens, listening to the carillon, discovering nature at the wildlife pond, attending an educational program or watching children delight in their playful adventures at Hammock Hollow, a visit to Bok Tower Gardens is truly worth the visit.

Amazingly, it's all right here in Lake Wales.

As a native of Lake Wales and a frequent visitor since childhood, I've long realized Bok Towers Gardens was a special place. It wasn't until 2003 that I discovered my own family connection to this magical oasis.

"It was the worst car ride we've ever had," commented my grandfather Arthur Baldwin. "It took half a day to get there!" Those are the words my mother Lovina Baldwin Turner remembered her father saying about a trip he took with his father, William Baldwin, my great-grandfather, from their winter home in Eustis to see President Coolidge and Mr. Bok's Sanctuary and Singing Tower. 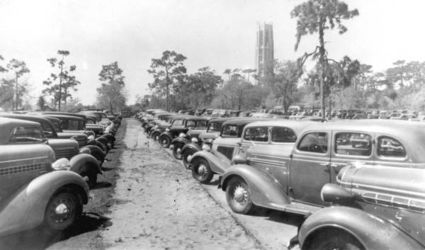 Although the Baldwins and Turners weren't acquainted, members of my maternal and paternal families attended the 1929 Bok Tower dedication. Decades later I asked my father Gene Turner if he remembered attending the dedication. "Well, certainly I do. I was there with Kate and our parents." He was only seven at the time. I was proud to attend the 75th Anniversary Celebration as I stood hand-in-hand with my mother to honor Mr. Bok's gift and our family legacy.

I found a photograph taken of me as a small girl in front of the Tower obviously eager to get off my mother's lap and explore. Many years have passed since the image was captured, but the eagerness to enjoy this oasis remains. Now, more than ever as the entries in our daily schedules seem out of control, the Sanctuary still offers a place where the human spirit can be enriched and inspired by the simple beauty and tranquility of nature.