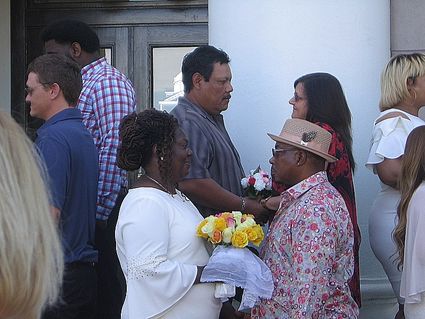 Mary Best and Nathan Best Jr. look at each other as Polk County Clerk Stacy Butterfield marries them and 13 other couples on Valentine's Day at the Polk County History Center.

On Thursday, Feb. 14, she and Nathan Best Jr. came to the Polk County History Center where they and 13 other couples were joined in matrimony. This is the sixth year the clerk's office has held the ceremony which is followed by a party in the Second Floor Courtroom inside.

In the ceremony the Harrison School for the Arts sang, Judge Mary Catherine Green delivered a poem and told the couple to cherish each and celebrate forever their unions.