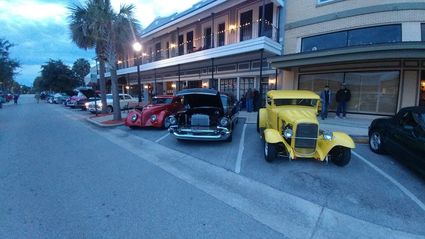 It's nearly the fourth Saturday of the month and everyone around these parts knows that means a parade of classic cars will be making their way to the Lake Wales Car Show. January marked the 9th Anniversary for this Lake Wales mainstay that has attracted thousands of awestruck antique car and truck enthusiasts.

Oldies music, shiny vehicles of all makes and models and fun times for mixing, spinning yarns and

going back in time when roads were one lane and often unpaved.

When the roads were paved muscle cars could do their own striping. Except the stripe wasn't white-it was black as coal rubber left as a reminder that gas then didn't cost $2 or $3 a gallon, and tires weren't over $100 each. And donuts were not something you ate for breakfast on Sundays.

You can't miss the MCs and originators of the Lake Wales Car Show, Larry and Cheryl Bossarte. They are the ones wearing smiles, and the annual commemorative T-shirts, appropriately sunshine yellow for 2019. (They may have a few left if you are lucky and would like to purchase one.) 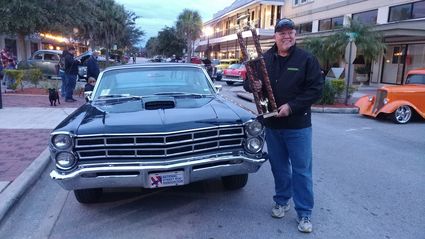 When asked to reminisce not about the cars, but the Car Show, Larry stated unequivocally, "It's been a great nine years. Really great people have supported us, and, yes, it has been a great ride."

I also ran into 9-year veteran exhibitor, Lake Wales resident Perry Batson, who said that the show "means a lot, and it brings a lot of attention to downtown, and this helps to showcase our great city" as he stands next to a shining example from his collection of cars, a 1939 Coast to Coast

January Cruiser of the Month honors went to Mac Fuller for his 4-speed factory air Ford Galaxie 500. "It belonged to a friend of my dad's," Fuller explained. "This is my first trophy."

Judging from the look on his face it won't be his last.