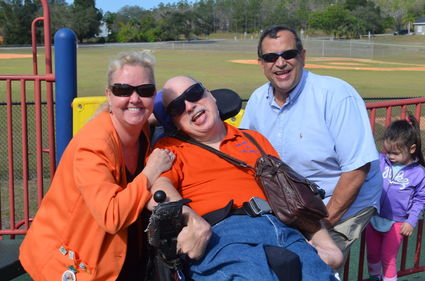 Yes, Jessica and Michelle Mathews, there really is a Barney Moore. During a celebration of the 10th anniversary of Barney's Dream Park on Saturday, Feb. 9, two sisters were thrilled to meet the man who inspired the creation of the fully handicap-accessible playground on the shores of Lake Wailes. Their mom, Michelle, says her girls play in the park just about every day but didn't know who he was. The 58-year-old, born with cerebral palsy quad-atonic who has spent most of his life using a wheel chair, grinned from ear to ear as he met his young fans.

Moore says he knows his mother Dorothy, who passed away at age 85, raised him to believe that he could do anything he wanted to do and supported all his dreams.

"There should be a park where all kids can play together," Moore recalls saying as a child. As he watched his brothers and sisters playing in the only park that was available, he started dreaming about a playground where he and all kids with physical challenges could play together. "She didn't want anything special for me. She just wanted me to be able to enjoy the things everybody does. Different doesn't mean good or bad, it just means different. I have different abilities. There's stuff I can't do, but there are ways to work around it if you think about it and want to do it. We need to enjoy life because life is meant to be lived." 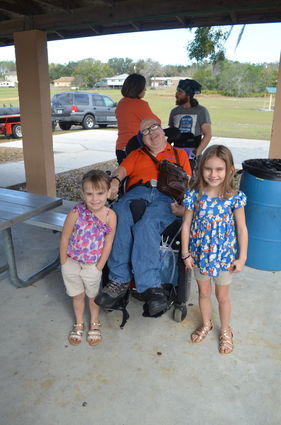 Michelle and Jessica Mathews were thrilled to meet Barney Moore at Barney's Dream, the park where they play just about every day.

After graduating from the University of South Florida in Tampa, Moore moved back to Lake Wales to become an advocate for children with disabilities. As a member of the Lake Wales Kiwanis Club, he raised money to build the park from 2007 to 2009 and received a $100,000 grant from Polk County. Today the $250,000 park exceeds the American with Disabilities Act's accessibility guidelines.

"It's called Barney's Dream, but Barney did not do it alone," he says. "It's not just about Barney and what Barney can do. It's to shed the light so other people can see. If Barney can do that so can Uncle Phil or whatever. We take the impossible and make it all possible."

The Lake Wales Kiwanis Club added a flagpole and re-landscaped the park to commemorate the anniversary. Open daily from 7 a.m. to 7 p.m. at North Lake Shore Boulevard and Tower Boulevard, Barney's Dream is available to rent for birthday celebrations and is used for many city events.

Visit http://www.facebook.com/lakewales.kiwanis for information on Kiwanis that meets from 11:45 a.m. to 1 p.m. the first and third Monday at IHOP on Highway 27.