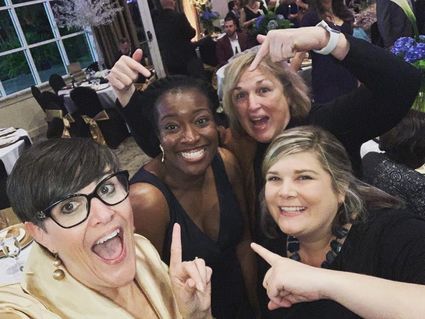 Principal Donna Dunson may or may not have shed a few tears when she was interviewing Lillian Anderson a while back.

But what is clear is Dunson was convinced Anderson needed to teach at Lake Wales High School, and that she was going to do whatever it took to get her there.

Seven years later, Anderson has been named Teacher of the Year for the Lake Wales Charter System, honored recently along with teachers and support staff from each of its seven schools during the system's annual gala dinner at Lake Ashton.

"She is one of the finest educators I have ever worked with in my life," Dunson told the crowd of 300. "I knew that from the first moment I read her resume, and saw her letters of reference, and after her interview, I knew she had to be at Lake Wales. No question, I begged her to come. I even got a little teary eyed."

A native of Washington D.C., Anderson got her bachelor's degree in Math Decision Sciences from the University of North Carolina and her master of arts in Teaching from the University of Southern California. An instructor of International Baccalaureate math at the high school, she cited both her mother, who encouraged her to go into teaching as a career, and her grandmother who was herself a teacher a principal, as being inspirations for her in the classroom.

"I continue to teach because I love seeing the light bulb go off for my students when they understand a difficult concept or when they realize how much math is used in the real world," she noted. "I love having an effect on a student who learns so much, not just math, but about the real world from the conversation held in my classroom."

Cheryl Carani was also honored as the system's first school bus Driver of the Year.