Travel Stop to Open in June 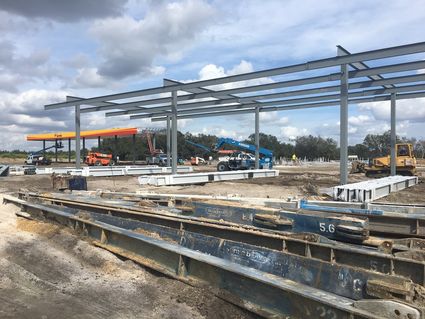 Love's Under Construction, Expected to be Completed in June.

Travelers passing through the Lake Wales area will have an additional reason to pause upon the completion in June of the Love's Travel Stop and Country Store now under construction on U.S. 27 at Hunt Brothers Road.

Filling almost 11 acres of former oak forest on the northeast quadrant of the intersection, Love's is designed to offer convenient service for truckers and travelers. It will feature a "trio" of fast food offerings including Subway, Godfather's Pizza, and Chester's Chicken.

Other significant changes are being sparked by the development, including the signalization of the intersection and lane improvements, and the installation of pedestrian cross-walks. Left-turn signalization will allow south-bound traffic to access the store in safety.

The new traffic signal will also serve the primary entrance of Lake Wales Commerce and Technology Park (formerly Longleaf Business Park) on the west side of US 27, which is home to a variety of manufacturers, including Kegel Bowling and Merlin Entertainment's Lego model-making center.

There are no immediate plans to install roadway lighting at the intersection, according to Brian Rick, public information officer at the Florida Department of Transportation.

The sprawling development will also offer a variety of services beyond the expected "food and fuel," including a tire and lubrication service center aimed at commercial truckers.

Permits filed with the City of Lake Wales Building Division indicate that the value of the construction is more than $2 million. The site was acquired by Love's in 2016 at a cost of over $1.2 million.

According to Tara Carr, public relations specialist for Love's, the new travel stop will be a part of Love's a growing nationwide chain of more than 480 locations. The Oklahoma City-based company plans to open more than 40 new locations in 2019,

Carr told LakeWalesNews.net that the Lake Wales location should be ready to open in June, and will employ 50 to 60 people, adding that the company looks forward to "adding another clean and friendly travel stop" in Florida.