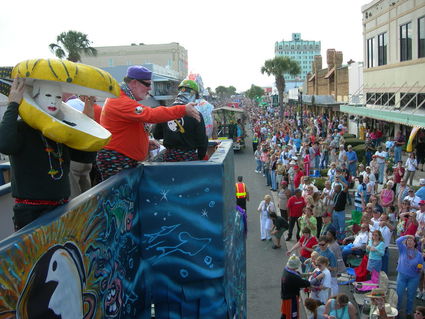 After more than 40 years of color and creativity, big changes are afoot for the 2019 version of the Lake Wales Mardi Gras.

A burst of street art that couldn't be contained, the Lake Wales Mardi Gras popped into existence in 1984, and has been entertaining residents and visitors ever since.

Hosted by more than a dozen private "krewes" and coordinated by a five-person committee, the 2019 events will take place on March 1 and 2, and include music, entertainment, and food, and one colorful Saturday afternoon parade. This year, for the first time, the central musical performances will be staged at Lake Wailes Park rather than in the heart of the downtown area.

Citing significant issues with adequate electrical power at last year's events, committee president Josh Curchy told LakeWalesNews.net that the decision to move the stages was not an easy one. "We had major problems" due to transformer issues, he said. In keeping with tradition, however, the exuberant parade will still wind through the downtown streets, including Park, Stuart, and Central Avenues, beginning at 3:15.

Scores of vendors and food trucks will line the lakeside fairgrounds during the event on Friday night and all day Saturday. "Mardi Gras is always a big event for the community," Curchy said. "It's evolved (from the committee's viewpoint) into more of a giant fundraiser," he added, pointing to the thousands of dollars raised each year, and donated to local charities.

Friday night will be highlighted by a 10 pm performance by B.Haven. Performing earlier Friday are Small Town Girls at 5:30 p.m., Blue Rooster Band at 7 p.m. and The Broke at 8:30 p.m.