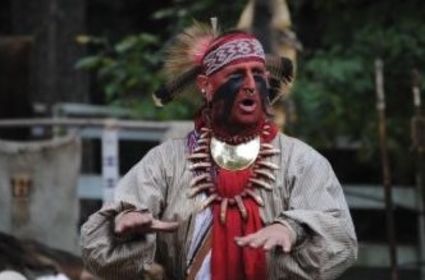 A free lecture by Jim Sawgrass, a member of the Muskogee Creek Indian Tribe, will be held Tuesday, March 12 at the Polk County History Center, 100 E. Main St. in Bartow. The presentation from 5:30-7:30 p.m. will offer insight about Southeastern native tribes and their culture.

A native Floridian, Sawgrass has been sharing his knowledge about Native American culture for more than 30 years. He served on the Florida Indian Council from 1991-1995. His lecture includes information about the tools, weaponry, housing and clothing work by Native Americans in the Southeast.

The Southeast Encampments lecture is part of the History Center's Race and Culture series, made possible by a grant from the Florida Humanities Council. In addition to the show about Native Americans, the series includes Spanish and black culture and memories of Florida, according to Myrtice Young, the historic preservation manager of the History Center.

Featured in the series will be a marking of when the slaves in Florida were freed on May 20, 1865, when the Emancipation Proclamation was delivered to Florida. That is being sponsored by the Bartow Community Relations Committee.

Anthony Dixon, a historian and professor at Behune-Cookman University, will discuss "The African Diaspora Experience in Florida." Tuesday, April 9.

On Tuesday, May 14, Florida historian Lu Vickers will take her audience to 1949 and Paradise Park. Down river from Silver Springs, this park catered to black tourists as many were not able to get to other parks. It stayed open until 1969.

Later that week, Saturday, May 18, Kitty Oliver, a historian, media producer and singer, will have "An Evening of Jazz and Multicolored Memories. Before that performance, outside on the north side of the History Center, CFC W. Lloyd Harris, a local historian and instructor at Summerlin Academy, will tell of the history of the Emancipation Proclamation and what it meant and still means in the United States.

The series will wrap up on Tuesday, June 11 with Carrie Sue Ayvar telling "Stories of the Florida-Con Sabor!" and the heritage of the Florida's Spanish culture.

All shows are at the Polk County History Center, 100 E. Main St., Bartow, and all are free.