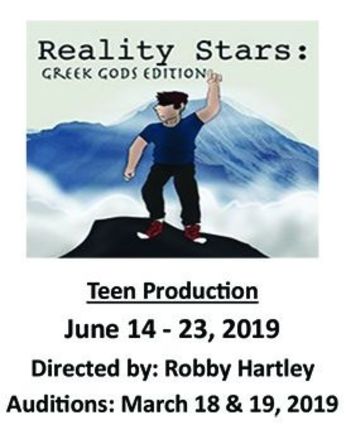 According to promotional material the play is a hilarious romp that explores the great Greek myths within a reality show framework: "Thirteen gods are put under one roof, but only one can survive to sit upon Mount Olympus."

Director Robbie Hartley will be casting "8 guys and 7 girls," ages 12-18. The play is not a musical, but three of the characters – two young men and one young lady – will be "singing for votes" in a competition that is part of the play.

Because Hartley himself says he doesn't do well with cold reading of a script, he is offering those interested in performing an opportunity to lip synch to show their acting ability, timing, memorization skills and how they can show emotion.

"I made this because I am awful at cold reading," Hartley said in a video promoting the lip synch opportunity. "I audition poorly because of that but I can deliver when it's time to do the production. Like when the play is going, I am good – I've been told that."

The lip synch audition is not mandatory, but Hartley recommends it for those who haven't worked with him before. Young people who have acted in a previous play directed by Hartley only need to perform if they are going for one of the three singing parts. They can sign a cappella or bring music on their phone or tablet.

All teens who want to be involved - whether onstage, backstage, production crew or helping with social media – should come one of the two audition days to fill out paperwork. Those planning to lip synch should bring up to a minute and a half of music on their phone or tablet that is radio friendly and can be played through the theatre's sound system. They also are welcome to bring props and wear costumes, whatever they need to "shine," Hartley said. "It's just to show me what you're made of."

A script is at the front desk of the Lake Wales Public Library for review at the library before auditions.

"Reality Stars: Greek Gods Edition" is described as "an inventive retelling of Greek mythology where tempers flare, lovers quarrel, and rivalries ignite. With an added modern spin, even as far as letting the audience text in their votes, it's must-see TV – er, theatre!"

Teens who are interested should view Hartley's two videos on the Lake Wales Little Theatre Facebook page. The videos describe how to reach Harley by email with questions or to request a private audition for those who can't make it March 18 or 19.