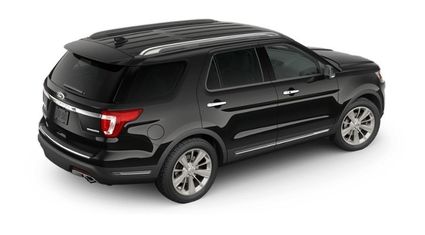 Instead Fields wanted the 2019 Ford Explorer Limited, which comes loaded with luxury, comfort, power and cosmetic features not included in the XLT. It also comes with 60 monthly payments of $773.17 – about $227 more per month than what the XLT costs.

But does the city manager really need all of those bells and whistles? For the last five and a half years he accepted $400 a month to drive his personal vehicle.

Fortunately the City Commission put the brakes on leasing the fancier vehicle. When they agreed in February to allow Fields use of a City car instead of a monthly allowance they obviously didn't expect it to cost taxpayers an extra $22,390.

Kudos to Vice Mayor Robin Gibson for pulling the March 5 agenda item, which was bundled on the consent agenda with other routine matters usually approved in a single vote. The item prepared by Assistant City Manager James Slaton didn't mention the car was for the city manager or that it would cost almost twice as much as his current car allowance. Previous agenda items on vehicle leases clearly stated which department would be using the vehicle.

Vice Mayor Gibson chastised City staff and expressed concerns that their lack of disclosure might appear that they were "gilding the lily or hiding something." Commissioner Curtis Gibson also lamented being kept in the dark suggesting city staff could send commissioners an email: "just communicate." Commissioner Terrye Howell said she expected city staff could come back with a cheaper option.

In his defense, Fields explained that the vehicle was like others leased recently for department head use and that the increased cost was due to the open-ended lease that allowed the City to keep the car at the end of five years. Fortunately, commissioners didn't accept his explanation.

Actually, a review of past agendas showed in addition to the police department vehicle only one other Ford Explorer, also an XLT, was leased one year ago for just under $500 a month for use by public/support services and utilities. The review also showed the open-ended lease was nothing new: all leases for at least the last three years were the same type that allowed the City to pay $1 and keep the vehicle. The City also has three more years to make payments of $355 to $371 per month for the 2017 Ford Escapes leased for use by City staff at the airport, permits and inspections.

City commissioners generally are pleased with the City's economic health and Fields' performance. In February they extended his contract to 2022. Instead of an increase to his $139,390 salary or a bonus, he asked for and was granted 2.6 percent, about $3,600, to go toward his retirement.

Fields' request for use of a City vehicle was more than reasonable. He just showed a hopefully brief lapse in judgment thinking City taxpayers should foot the bill for a vehicle that most could never afford for themselves. We expect he'll bring back an acceptable and affordable option.