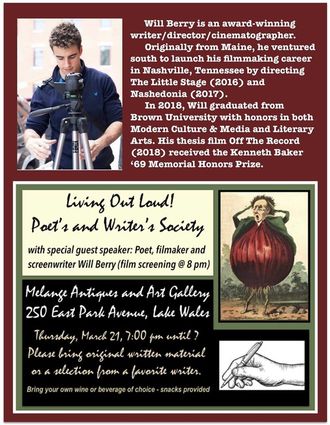 The fourth meeting of the Living Out Loud Poet's and Writer's Society is set for 7 p.m. Thursday, March 21 in the gallery at Melange Antiques, 250 E. Park Ave. in historic downtown Lake Wales.

Participants are asked to bring original written material or a selection from a favorite writer. While attending the society meeting, participants also can enjoy a new art exhibit with the works of Nancy Dillen and Marilyn Rackelman. Those attending should bring their own beverages; snacks will be provided.

The event also will include a special guest speaker Will Berry, an award-winning writer, director and cinematographer. Originally from Maine, Berry ventured south to launch his filmmaking career in Nashville, TN by directing The Little Stage in 2016 and Nashedonia in 2017. Berry graduated in 2018 from Brown University with honors in both modern culture and media and literary arts. His thesis film, Off the Record, in 2018 received the Kenneth Baker '69 Memorial Honors Prize.

The group at 8 p.m. will screen one of Berry's short films, based on an original poem.