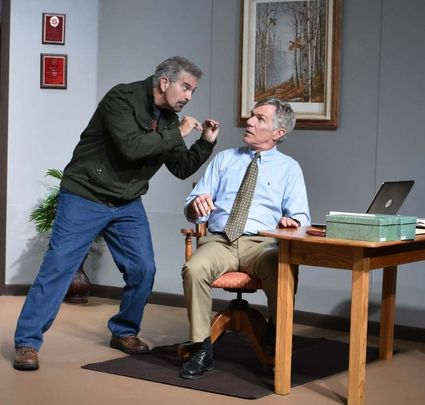 An experienced cast and a script full of twists and turns lead to an entertaining evening of live theatre in "The Assassin's New Friend." The psychological thriller runs through March 31 at Lake Wales Little Theatre.

Bok Academy educator Jeff Herman plays Kendrick, the "crazed man" plotting to kill attorney Douglas Brendan, played by engineer John Durbin. Both are veterans of multiple shows, as is apparent in their performances.

Herman's portrayal of the "psycho" Kendrick takes the audience on an emotional roller-coaster ride as he stalks the stage while flipping from the dark, brooding killer to his alter-ego, a wise-cracking cynic who relishes taunting his true victim.

Durbin, meanwhile, perfectly portrays the rational but arrogant, paranoid Brendan, who waves his gun at every knock on the door. His domineering treatment of his timid, frightened wife, well-played by local teacher Denise Higginbotham, brought nervous laughter from the audience.

Caught between Kendrick and Brendan, meanwhile, is true-crime writer Brian Hollander. Played by real-life writer Robert Connors, the challenging role runs an agonizing gamut. Haunted by his repeated encounters with the creepy Kendrick, and still mourning the mysterious disappearance of his first wife, Loraine, Hollander is dragged through an emotional grinder as Kendrick manipulates him for a darker purpose.

Hollander has remarried, but his new wife, Dana, portrayed by local dog-groomer and self-described animal-lover Holly Murren, finds herself competing with the ghost of the vanished Loraine. Murren carries the role very well as her character finds herself caught up in the dark web of plotting.

Determined to find the truth, Dana enlists the help of Detective Hal Nelson, played by stage new-comer David Williams. Williams, despite his youth, delivers a compelling performance as the FBI-style investigator with poise.

Appearing in every scene, Connors as Hollander is apparently a quick-change artist who puzzles, laughs, and even cries during a particularly haunting scene. Connors' portrayal is outstanding as a true-crime writer who finds himself a character in one of his own best-selling books.

Herman as Kendrick, meanwhile, seems to reappear at the least-appropriate moments, an intruder determined to use psychological games to slowly erode Brian's sense of right and wrong, truth and fiction. His dynamic portrayal was an obvious crowd-pleaser. 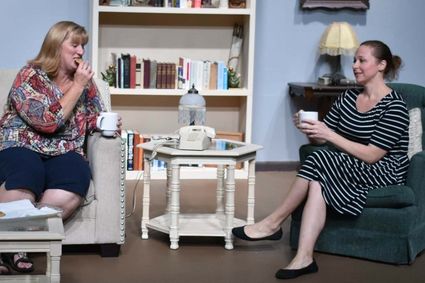 Written by John Kaasik, the play is well-directed by Julio Acevedo. Acevedo is the Human Resources director at Lake Wales Charter Schools, and his apparent talent for choosing the right people has paid dividends in "The Assassin's New Friend."

Performances begin at 7:30 p.m. on Friday and Saturday evenings, and matinees at 2 p.m. on Sundays through the end of March. Tickets are available online, and patrons may choose their preferred seating at http://lwlt.org. Lake Wales Little Theatre, now in its 41st season, is all-volunteer and self-supporting. Plays are performed in an intimate, 140-seat auditorium located at 411 North Third Street, one block east of Scenic Highway, next to the historic Kirkland Gymnasium.