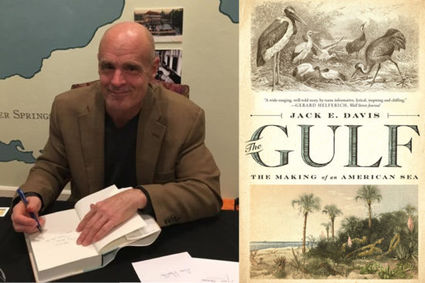 Join Dr. Jack E. Davis at the Lake Wales Public Library for his lively long historical view of the Gulf of Mexico, drawn from his 2018 Pulitzer Prize-winning book The Gulf: The Making of an American Sea.

Significant beyond tragic oil spills and hurricanes, the Gulf has historically been one of the world's most bounteous marine environments, supporting human life for millennia. Davis starts from the premise that nature lies at the center of human existence, and takes his audience on a compelling journey from the Florida Keys to the Texas Rio Grande, along marshy shorelines and majestic estuarine bays, profoundly beautiful and life-giving. At the center of his talk is the way people, from pre-Spanish natives to present-day coastal residents, have organized their societies and individual lives around nature, and how Gulf nature has been a positive force in human events.

Jack E. Davis is an award-winning author of three books. He has published articles in Orion, Forum, and The New York Times. His latest book, The Gulf: The Making of an American Sea, was released in 2017. He previously published, in 2009, An Everglades Providence: Marjory Stoneman Douglas and the Environmental Century. He is currently a professor of environmental history at the University of Florida, where he impresses upon his students the fine art of writing.