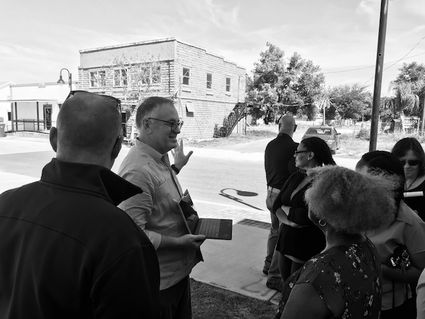 Four representatives of the urban design firm Dover Kohl and about a dozen interested citizens took a walking tour Wednesday morning of the northwest business district in Lake Wales.

Dover Kohl planners are in Lake Wales all week obtaining citizen input on how to revitalize and connect the historic downtown and northwest section so they can design a plan for the next 20 years.

Local attorney Sara Jones, chairperson of the Northwest Advisory Committee, and former city commissioner and local business woman Linda Kimbrough offered insight into the traditional African American neighborhoods. Jones said code enforcement has forced the demolition of numerous substandard homes and business buildings, but the City has no foreclosure process to take ownership of the properties. The City ends up mowing the lots but doesn't have title to the property to allow for future development, Jones said.

To show the area's potential Victor Dover shared an early version of a sketch overlayed on a photograph of Lincoln Avenue complete with renovated businesses, trees and other improvements. The firm plans to show that and other sketches at a community meeting at 6 p.m. Friday at the Lake Wales Woman's Club at 275 E. Park Ave.

The walking group identified numerous empty lots that could eventually be developed with houses or apartments and several core buildings that could become restaurants or other business establishments. Some of the homes in the area were dilapidated with broken windows and falling roofs, while others were well kept. Dover Kohl is trying to determine what could be developed to help restore the area to a thriving business district.

Consultant Rick Hall educated the group about the implications of road and sidewalk width and turning radius. Roads and sidewalks in the area were generally narrower than recommended.

Several of the walkers acknowledged they had never walked through the area and that the visit was eye opening. 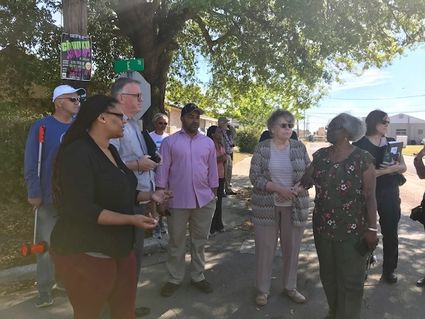 Dover Kohl conducted a public meeting Monday evening, attracting more than 100 local residents with ideas on how to improve Lake Wales. The consultants are holding an "open design studio" Tuesday through Thursday from 10 a.m. to 6 p.m. at 218 E. Park Ave. where people are invited to drop by and offer opinions.