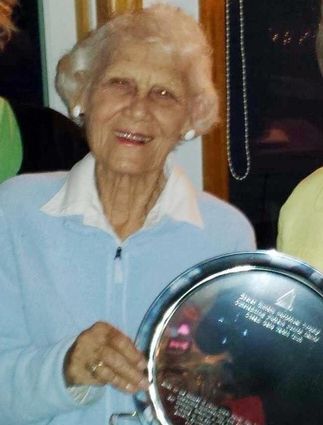 Nancy D. Kahler, 91, of Lake Wales passed away Wednesday, April 3 at Winter Haven Hospital. She was surrounded by all her loved ones.

Nancy was born October 26, 1927 in Elizabeth, NJ to the late Fred A. Dreier and Rose (Vierling) Dreier. Nancy was a graduate of Gettysburg College, PA with a major in chemistry and a minor in math. She has been a resident of this area since 1952 coming from Westfield, N.J. She was an Agent/Broker and owner of Plantation Inn Realty. Prior to that she and her late husband were the owners of the historic Plantation Inn in Lake Wales.

Nancy enjoyed sailing, golfing, tennis, swimming, bridge and traveling - taking many "Grandma Trips" with grandsons Robby and Michael to such place as China and Russia.

In high school she was the New Jersey State goalie for field hockey. However, sailing was her passion. In 1946, Nancy was the Barnegat Bay champion in the Sneakbox class and in 1949 received the O.G. Dale Memorial Trophy for Outstanding Sportsmanship in the Barnegat Bay Yacht Racing Association; a prestigious award that started in 1936 and continues today. There are two perpetual trophies in her name; the Dreier Sisters trophy for Outstanding Female Sailor that in housed at the Ocean Gate Yacht Club in NJ and the Nancy D. Kahler trophy for Outstanding Sportsmanship which is housed at the Lake Wales Pram Shed. Nancy was involved with the Lake Wales Pram Fleet from the 1950s until her death.

Funeral Services will be held 4 p.m. Friday, April 12 at the First Presbyterian Church in Lake Wales with the Rev. Chad Reynolds officiating.

Marion Nelson Funeral Home is handling arrangements. Condolences can be sent to the family at http://www.marionnelsonfuneralhome.com.