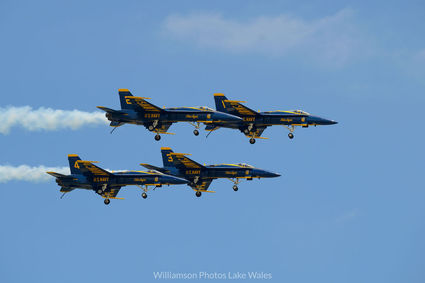 Capt. Beau Mabery loves being part of the Blue Angels team. It's the second year for the U.S. Marine captain from California to fly "Fat Albert," the C-130 transport that carries the U.S. Navy aviators and their equipment to about 60 air shows a year.

Mabery said flying into Lakeland Linder Airport for the 45th Annual Sun 'n Fun Fly-In and Expo was an interesting experience, "like flying into a hornet's nest of planes all around." Thousands of private pilots fly to Lakeland each year for the world's second largest air show.

"I've heard nothing but amazing things about this show," Mabery said. "I didn't realize how big of an air show it was."

Mabery grew up near Vandenberg Air Force Base and developed an interest in aviation at a young age.

"I never flew as a kid myself, other than on commercial airliners, so I wasn't a pilot," Mabery said. "The first time I did I was actually in college, it was just an amazing feeling."

Mabery said he started flying in a Piper Cub and then switched to a Cessna before going to flight school.

When the Marines offered him the opportunity to become a pilot he said, "yes." He joined in 2011 and after 6-7 months of infantry training and then flight school he joined one of the C-130 squadrons flying throughout the Pacific and Asia. He was stationed in Japan and spent time in Thailand, the Philippines, Korea, Guam and the Marshall Islands.

Two years ago he joined the elite Blue Angels team. Mabery is very knowledgeable about the Blue Angels and can describe their training, aerobatic formations and the G-forces they absorb without special inflatable suits. 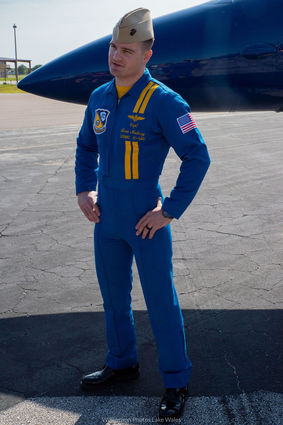 "It's actually safer without the suits because the pilots need to feel the 40-pound spring that pulls the stick forward," Mabery said, noting the pilots train in a centrifuge and focus on nutrition, diet, hydration and exercise to prepare for flight.

Mabery said the Blue Angels used to fly up to 70 shows a year, but that number was reduced to fight fatigue. Blue Angel pilots perform aerobatic maneuvers that bring them within 18 inches of each other so it's important that they are always at their best.

While he enjoys being part of the Blue Angels team, Mabery said he has no interest in flying the F/A 18 Hornet fighter jets: "Absolutely not. The C-130 is my favorite plane and I'm just happy I get to fly it."

The Blue Angels are featured in Sun 'n Fun Air Shows Friday, Saturday and Sunday afternoons, along with dozens of other performers. Admission is $39 for adults and $18 for those age 7-17; Florida residents who pay for Saturday get in Sunday for free.