Another show on Saturday 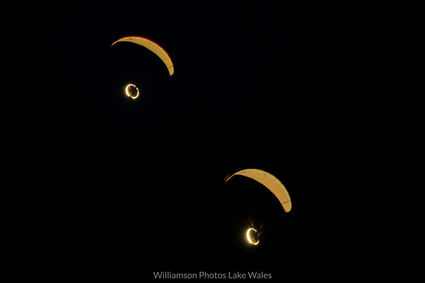 Of the legion of exhibits, aircraft, and fly-in planes of all shapes, sizes and colors on display at the 45th annual Sun 'n Fun International Fly-IN & Expo (www.flysnf.org) continuing in Lakeland through Sunday Apr. 7 one exhibitor stands out from the crowd: Lakes Wales based Aviator Paramotor (www.aviatorppg.com).

Local resident and owner Eric Farewell is riding the current wave of popularity and growth that has spiraled his sport into the stratosphere. Through continuing You Tube and Facebook posts Farewell has attracted a following from as far away as England and Spain, and by sharing his dream pastime with others Eric is a catalyst bringing attention to this relatively little known sport throughout the US and experiencing exponential growth.

"I spend my life living my passions, and am blessed to have the freedom to do so," states Farewell, 33. His business has taken off to the point that he has built a waiting list that continues to grow while adding new lines of products and accessories as well as expanding his facilities at the home base on Airport Road at the Lake Wales Airport.

As one of the featured Wednesday evening Sun 'n Fun events Farewell's Paradigm Aerobatic Team flew into the sky to demonstrate the closest thing to human flying as it gets. The flyers have what looks like a large, round fan strapped to their backs and hang from a parachute canopy.

One member of the team, Javier (Javi) Tejiero Lopez, braved the gusts and rose high into the night sky to attempt a feat that only five people in the world are known to accomplish: acrobatic parasail somersaults, called infinity, and rotating spins, called helicopters, over 1,500 ft. up. While he continued his upward climb four others-Farewell, Kyle Mooney, and Doran and Adriel Martin-performed maneuvers and a light show at more reasonable heights of up to 100 feet in a routine that came close to being scrubbed due to the windy conditions.

On his way up to the ideal altitude Tejiero Lopez eyed a target for his landing, accessed wind speed, and waited patiently for the exact time to perform his unique and daring stunts.

Suddenly Tejiero Lopez began to tumble and spin back to Earth completing 10 full infinities and ten helicopters before resuming a normal descent with lights cutting through the sky and impressing onlookers who were able to follow his every move.

It was a dark moonless night providing the perfect backdrop for a light show. The parasailers highlighted a Wednesday evening that featured performers that included the U.S. Army Parachute Team, the Golden Knights (Fort Bragg, NC), who put on a human fireworks display, lighting up the sky and rousing the crowd to a scene reminiscent of the Fourth of July. The crowd marveled at the Phillips 66 Aerostars who have been thrilling audiences for more than a decade with their airplanes choreographed in a multitude of formations all at 200 mph speeds or better.

The paramotor group will be featured again Saturday night after 7:30 p.m. in a full air show complete with dancing drones and a fireworks display.

Don't miss this exciting event. Hundreds of thousands of visitors, thousands of volunteers, and a diverse collection of aircraft, exhibitors and vendors make Sun 'n Fun one of, if not the best, air shows in the country. Florida residents who pay the Saturday admission of $39 for adults and $18 for ages 7-17 can come back Sunday for free.