Planners Propose Lake Wales Restore "A City in a Garden" 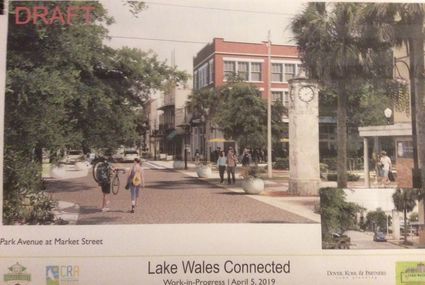 A redesigned Park Avenue would offer raised pavement without curbs, and infill housing.

A "City in a Garden" with landscaped streets, a redeveloped Grove Manor featuring a mix of housing types, and a new "town square" were among the ideas presented to Lake Wales citizens Friday evening to cap a week of intensive study by the planning firm of Dover Kohl. Most of the 100 in attendance were excited by the possibilities.

The week-long effort, sponsored by Lake Wales Mainstreet and funded by local businesses, included gathering ideas and suggestions from the public, as well as a hands-on re-imagining by a large team of specialists, including experts in transportation, economics, landscape design, architecture, and more.

"We help towns like yours decide what they want to be when they grow up," firm principal Victor Dover said, emphasizing that the ideas presented were still just drafts. Town founders created the buildings, but the most important part is not the square footage, it's what's in between the buildings, he told the assembled crowd.

"This process is like a boot camp and therapy session," MainStreet Executive Director Karen Thompson told the gathered public. "It's a communications blitz" designed to find out what people want their city to be.

Asked about his perception of the process and results so far, MainStreet President Rusty Ingley replied "It's awesome. We couldn't be happier."

During Friday's presentation Dover saluted the city's founders and the famed landscape architecture team of Frederick Law Olmsted Jr. for establishing the idea of the "garden city" more than 100 years ago.

"It was a time when the idea of a city was a dirty, smoky, industrial place," Dover told the audience. Here, he said, it would be different. Parks and preserved lake shores, dense landscaping, and an organized system of roads would set the tone for a high quality of life.

Citizens participating in the process were polled to rank priorities Friday night.

High on citizen's lists was a redesign of Park Avenue to eliminate angled parking, widen sidewalks, and raise the pavement to eliminate curbs and create a pedestrian-friendly environment. The present usage shows a mix of more than 70% vehicle usage of space on Park Avenue. The draft design reverses that to emphasize pedestrian space, and includes a new "town square" occupying what is presently a parking lot on the north side of the street.

More downtown events, and bringing back those that have been moved away, were also cited as keys to generating a downtown renaissance.

"We've been blown away" by the public response and enthusiasm, Dover Kohl principal Meredith Bergstrom told the LakeWalesNews.net. "That's a credit to the organizations that came together to plan this."

Other concepts that received top rankings included the redevelopment of Grove Manor, an aging public-housing apartment sprawl slated for redevelopment. Its large site offers an opportunity to raise densities, and help establish a stronger market for downtown, planners said. They offered designs that would create a new "neighborhood" of mixed low, moderate, and market-rate housing, including cottages, town-homes or "row" housing, and single-family houses, on a new street grid which would preserve existing large trees.

Economist Anita Morrison explained that business development was dependent upon creating demand, partly by building more housing in the downtown area. Infill and upstairs housing will be key to "densifying" the resident population in the city's heart, which will in turn help to sustain neighborhood businesses. Cafes, restaurants, and other shops will follow residential demand. As an example of a present business opportunity she cited the request of residents in the Northwest neighborhood for a coin laundry.

Transportation Engineer Rick Hall offered numerous examples of how street design changes the atmosphere of a place from car-oriented to people-friendly. Cited as an example was a redesign of First Street, which was described as a "raceway."

"That's the key to the entire idea of 're-connecting Lake Wales,'" Dover told the group. He shared conceptual drawings of a restored Seminole Hotel facing a shady, narrower, landscaped street with bicycle and pedestrian lanes. The three-story building is presently under a demolition order.

Other ideas proposed included reducing the pavement width on Scenic Highway to slow traffic and ease pedestrian crossings, and the creation of a new roundabout to replace the dangerous and confusing intersection of Scenic and Crystal Avenue near the library. Other roundabouts have been proposed for the intersection of Scenic and Burns, and also Scenic and Mountain Lake Road. The idea has gained popularity following the success of the redesign at Hunt Brothers Road and Scenic Highway.

"I've been super-excited about the enthusiasm from across the city," Lake Wales Planning Director Kathy Bangley told LakeWalesNews.net. "The buzz is good!" she said, adding that she was happy that the planners recognized the need to "make it an inclusive process to be more successful." Public input has been actively sought, and that will be ongoing, according to Dover Kohl.

The planners didn't ignore the shortcomings in local bike trails, either, suggesting the extension of the rail-to-trails project which currently ends in a cul-de-sac just short of Scenic Highway. "It's like 'don't even think about going there,'" Dover laughingly told the audience. It should be connected, he said, and could be easily routed south along Scenic Highway to Seminole Avenue, extended to connect to First Street and downtown, and also north and west along the existing railroad. 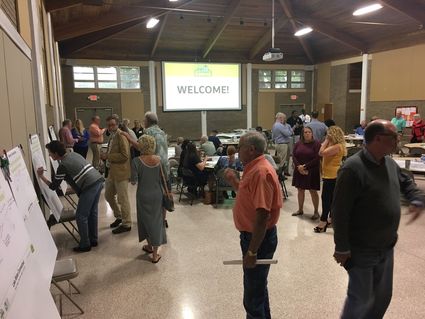 The restoration and extension of the Olmsted landscape plan was mentioned as the way to re-connect the city to the asset of Bok Tower, extending the gardens to incorporate the same feeling.

"It's about building a place where people will want to be for generations to come," Thompson told the group.

So How Do We Pay To Create This Beautiful Place?

As Lake Wales MainStreet leadership and a team of professional planners create vivid and beautiful images of what Lake Wales could be, the question is often heard: “It's great...but how do you pay for it?”

Few people want to pay more in taxes, unless the extra expenditure can be clearly shown to have significant benefits. Re-configuring city streets, adding lush landscaping, and even partnering with private developers for major improvements costs money. So what's the solution?

“So what's a tax increment?” many people then ask. It's simply the difference between district-wide tax receipts today, versus those when the district was created. Each time property values rise, the increment increases. That money must be spent on projects that help to improve the district, which in theory further increase the values, creating a “feed-back loop” of rising values and more investment.

The added benefit to the City of Lake Wales is that the CRA also captures the share of increase that would otherwise go to Polk County, and be likely spent elsewhere.

The predictable receipts are often used as security for bonds, so that future revenues may be spent today. The process is known as “Tax Increment Financing,” or TIF. With today's relatively low interest rates, that approach may be very advantageous.

The first CRA district in Lake Wales helped fund the original, now badly out-dated, improvements that were made in the downtown in the early 1970's. Those bonds were retired many years ago.

Lake Wales has, over the years, re-drawn its districts, thereby restarting the clock on the increment capture, but the process is still working.

As Lake Wales citizens digest the potential transformation of the city from a somewhat dowdy present into the envisioned “City in a Garden” being proposed, LakeWalesNews.net will delve further into the question of required versus available funding.

The decisions we make as a community today will determine our quality of life five years from now, and for generations to come. The critical questions ahead demand serious, well-thought out answers, based on facts. We encourage you to stay informed.