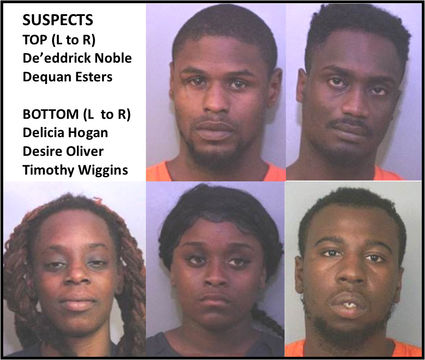 One St. Petersburg and four Orlando residents were arrested after fleeing from a Lake Wales police officer who was pursuing them as suspects in the reported theft of more than $2,400 in electronics and other merchandise from the Lake Wales WalMart.

Shortly after 1 a.m. April 4 Lake Wales Officer Edgar Claros attempted to stop a silver Toyota Highlander that was speeding west on SR 60 near 11th Street. The vehicle matched the description by witnesses at WalMart who reported suspects removing televisions, a computer, watches and clothing from the store. By running the license plate Claros determined the vehicle had been stolen in Orlando. His pursuit, with the suspect vehicle reaching speeds in excess of 100 miles per hour, was ended in Bartow over safety concerns, but police notified other law enforcement agencies, who continued the chase on I-4.

Officers from the Polk County Sheriff's Department and Lake Alfred Police Department apprehended five suspects after they crashed into a vehicle exiting the Wawa convenience store at U.S. 27 in Davenport. Merchandise matching what was reported stolen was found in the vehicle. A sixth suspect, reported to be the driver's girlfriend, fled the scene.