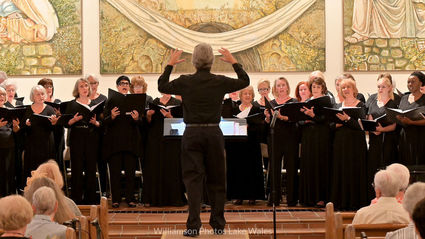 Students from the Warner University Chorus and Chorale members were accompanied on piano by Dr. Jonathan Reed, Warner University assistant professor of music, and on organ by Lee Cobb, who serves as organist and choirmaster at St. Luke's Episcopal Church in Ft. Myers.

Treadway, who serves as director of music at First Presbyterian Church in Lake Wales, says he's leaving the Chorale due to his increased job duties at the church, but is optimistic about the future of the Chorale.

"Now that Andrew Allen is doing such a great job as the director of the Lake Wales Arts Council, it's a good time to bring in some new blood with a musical director who can take the Chorale to new heights and perhaps on tour as we did in past years," says Treadway, who also complimented Cobb on his organ performance. "It takes someone with real chops to play such challenging selections."

"Performing here is like embracing an old friend," says Cobb, former assistant carillonneur at Bok Tower Gardens, who literally embraced many old friends, including former Singing Tower carillonneurs Bill De Turk and Milford Myhre, who congratulated him at the reception following the concert.

"I overheard someone who attends this church say she had never heard their organ sound so wonderful," says Bill De Turk, Cobb's boss at Bok Tower Gardens. "The exceptional performance was a reflection of the years Vince devoted to the Chorale, but bittersweet knowing this was his grand finale."

Program selections included: "Faire is the Heaven" by William Harris; "O Taste and See" by Ralph Vaughan Williams; "Greater Love Hath No Man" and "I Saw the Lord" by John Ireland; "O Be Joyful in the Lord: Psalm 100" by Benjamin Britten; "Psalm 119" with original music by Treadway; and "Requiem" by Maurice Durufle. 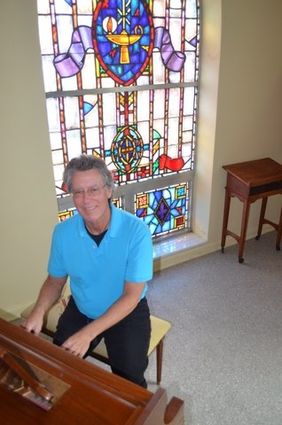 "If you love to sing and are interested in joining the Chorale, contact us to set up a time to audition," says Allen. Chorale member dues are $50 per semester and $15 for students. Music is included. Rehearsals are from 7 to 8:30 p.m. on Mondays resuming in the fall. For more information, call 863-676-8426 or visit http://www.lakewalesartscouncil.org to download and fill out an application.