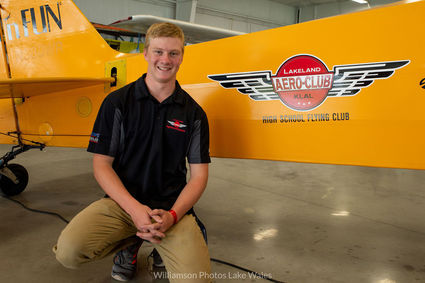 While some of the world's finest pilots demonstrated their skills at the 45th Annual Sun 'n Fun Fly-in & Expo in Lakeland a contingent of teenagers gathered nearby rebuilding a wing and tuning up a jet engine. Babson Park's Jackson Gerard and his friends in the Lakeland Aeroclub hosted hundreds of visitors to the Fly-in, including officials from the Federal Aviation Administration who were interested in meeting the next generation of aviators.

Sixteen-year-old Gerard is in his first year at Central Florida Aerospace Academy, a public high school career academy run by the Polk County School Board in conjunction with Sun 'n Fun at the Linder Airport in Lakeland.

Students like Gerard with an interest in aviation can actually receive their pilot's license and high school diploma at the same time and gain valuable college credits and career training. Gerard plans to complete his aviation studies through a new program across the tarmac at Polk State College, which he says will prepare him to be a commercial airline pilot.

"There's a huge need for airline pilots right now. That's my main goal, to get in there and start working for the airlines," Gerard said.

According to Sun 'n Fun Executive Director John "Lites" Leenhouts, students completing the academy as pilots or aircraft mechanics can enter professions with starting salaries upwards of $80,000 per year. 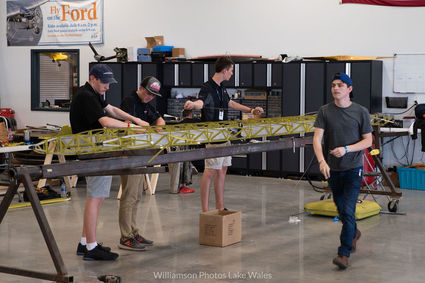 In between sessions restoring the wing, Gerard and friends slipped out of the club hanger to enjoy the exhibits and his third Sun 'n Fun.

"The first airshow I went to was with my dad. I could barely talk and I fell in love with it," Gerard said.

The Aeroclub is open to teenagers from the community, not just academy students.

"We build, restore and fly airplanes," said Gerard, pointing out work groups in the Aeroclub's hanger. "It's insane. We have so many people coming out here, it's absolutely amazing. Hundreds of people come in every day to see what we do."

EDITOR'S NOTE: Jackson Gerard is also a world champion barefoot water skiier. Read about that part of his life at https://www.lakewalesnews.net/story/2019/03/13/sports/an-hour-with-a-world-champion/204.html