Still Crazy (Fish) After All These Years 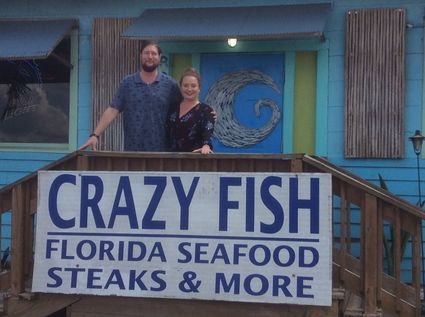 Now run by Matthew Brock and his partner, Dwayne McQuillen, their years spent managing popular Disney Springs restaurants is proving valuable as they steadily tweak the menu and atmosphere of the place. The pair purchased the restaurant last year.

"Jim and Jeannie did a great job," Brock said of the former owners, who created the popular restaurant more than a decade ago. "We just want that to continue." Brock said he was especially pleased with the original staff, and that "everyone wanted to stick around. We got very lucky."

Originally from upstate New York, Brock shares his philosophy with McQuillen, whom he met in 2012 as they worked together at Splitsville, located at Disney. McQuillen hails from Ohio, but like Brock has spent two decades in the restaurant business, mostly in Florida.

"Everyone understands amazing food," Brock said as he introduced some of his most popular dishes, including fried shrimp, and grouper, which is served blackened, fried, grilled, or broiled.

Oysters Rockefeller may be ordered by the dozen or half-dozen. The delicious treats are fresh-shucked, blended with spinach and bacon, and baked for ten minutes to sizzling perfection.

The delicious Maryland-style crab cakes came with a choice of sauces including Key lime, red cocktail, and tartar. The crab cakes are made fresh daily, and we found them delightfully sweet, much more 'crab' than 'cake.' We met James Galbraith, who Brock introduced as "the head crab chef." He explained the blend of ingredients that made them pop, including shallots and celery. The seasoning was so good that the sauces were purely optional.

An order of shrimp proved to be very lightly coated with what Brock described as a "dry" batter. The shrimp themselves were plump and fresh. "We buy only iced shrimp, never frozen," he added, assuring us that they produced a much tastier dish. We couldn't disagree.

Brock shares some of the management duties with his wife, Stephanie, as well as the busy staff. The couple will share their fourth anniversary this month. Brock explained how he earned his wife's approval to purchase the Crazy Fish.

"I surprised Stephanie," Brock said. "I brought her here for lunch, and as we were leaving, I asked her what she thought of it. She said 'It's a ten!' She loved it. That's when I said 'That's a good thing, because we might be buying it.'"

One change that new ownership has brought is a full liquor license. The restaurant has a cozy bar area in the rear, as well as an expansive outdoor deck and garden. They offer rotating drink specials, and Brock explained that, as a former bartender, he favors a 2-1-1 mix of sweet, sour, and liquor to balance a tasty drink. "A drink we call the "Jump-off" is the best way to start your evening," he said, describing a blend of Old Smokey Habanero Mango whiskey and fresh lime juice, muddled strawberries, and peach puree, topped off with ginger beer.

A fresh blackened snapper was presented with a side of a pair of perfectly-cooked redskin potatoes. A heap of fried spinach was thin, airy chips which seemed to dissolve in the mouth. The fish itself featured a moderate coating of tasty blackening spices. 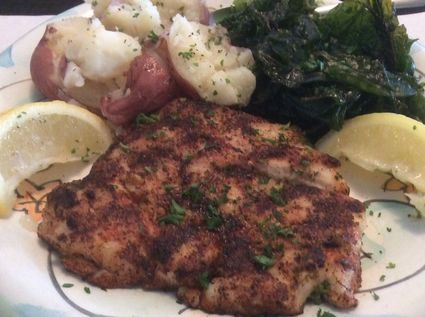 Blackened Yellowtail Snapper is a specialty at Crazy Fish

Although Brock has yet to purchase a home in Lake Wales, he and Stephanie are already getting involved with the community. Crazy Fish is a sponsor of a Lake Wales Little League baseball team, as well as the youth soccer spring league.

Crazy Fish serves lunch and dinner Monday through Saturday, and is closed on Sunday. More details are available on their website.

Brock acknowledged that he will face some challenges when construction begins on the SR 60 overpass spanning US 27 directly in front of his restaurant. Ultimately, access will be through a new frontage road along 60. "We'll work that out," he said.

"The main thing we want to do is keep the 'Key-Westy' feel," Brock said. "That's why we repainted all the spindles (on the deck) and the bar to pastel colors. We want you to walk out the door and expect to see the beach."