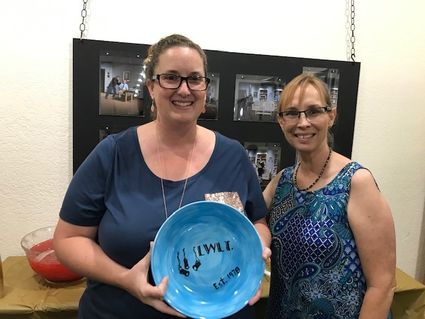 The Lake Wales Little Theatre Board of Directors recognized its 60-plus volunteers Saturday, April 13 with an afternoon reception at the theater.

Board President Leslie Grondin thanked the assembled volunteers for their contributions to the non-profit organization, which has been providing live entertainment to the community since 1978. "Without all of you this theater would not be able to run as smoothly as we're running. Even if you're working out front, back stage, on stage you guys are our best asset here at the Lake Wales Little Theatre and I am greatly appreciative of every single one of you," Grondin said.

Grondin gave special recognition and plaques to three longtime volunteers: past board member Vicki Iliff, who served 16 years as secretary; past president Marc Paetzold, who is still involved behind the scenes; and Terry Loyd, who has acted, directed and volunteered in many capacities over the past 36 years and who financially supports some of the productions.

Loyd could not attend the volunteer recognition, but Grondin said: "He wants to thank everyone for volunteering and keeping the theater alive. He is so grateful for everyone coming out to volunteer."

Paetzold spoke fondly of his time with the theater, saying "This has been one journey I've been happy to travel."

Grondin also was recognized as she announced plans to step down after four years as Board president and two year as vice president. Board Treasurer Lorelei Hagen presented Grondin with a bowl hand-painted with the LWLT logo. The president's role isn't always glamorous and Hagen noted that Grondin not only had to answer many emails but also show up at the theatre in the middle of the night for false alarms and respond when notified the facility was running out of toilet paper.

Except for one part-time person, who is paid to oversee the box office a few hours each week, the LWLT is an all-volunteer organization.

At every production the theater puts out a call for volunteers, inviting people to try their hand at acting, help build, paint or decorate sets or work with the backstage crew. Other volunteer opportunities include: selling tickets at the box office, hospitality during productions, greeting patrons, housekeeping, lawn maintenance, makeup, publicity, sewing, photography, working lights or sound, helping with the newsletter or writing grants. 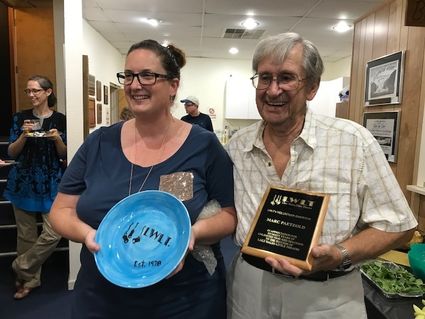 The Lake Wales Little Theatre operates from an intimate 140-seat theater at 411 N. Third St. that once served as the high school band building. In addition to three regular productions that run three weekends each in November, January and March, the theater offers a teen play in June and a children's play in October.

The theater is funded by donations, grants and ticket sales. The nonprofit group is responsible for maintenance, furnishing and operating costs for the facility, which it leases from the City of Lake Wales. Patrons donating $250 can "adopt-a-seat" and receive recognition for helping underwrite facility and maintenance costs.

For information about productions, to buy tickets, volunteer or make a donation, visit the theater's website at http://www.lwlt.org.