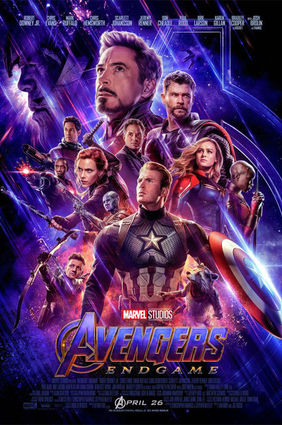 Eagle Ridge Mall Regal Cinemas in Lake Wales will devote half of its 12 movie screens Thursday night, April 25 to the nationwide rollout of the superhero fantasy sci-fi thriller Avengers: End Game. But unlike some theaters that plan to run the movie into the wee hours and overnight, Regal will send moviegoers home before midnight.

Pre-sales nationwide hit more than $120 million by Tuesday with industry experts predicting $300 million in sales for the first four days. According to theater ticket seller Fandango, presales are already five times the first week for the 2018 Avengers: Infinity War.

According to IMDB (Internet Movie Database), Avengers: Endgame is an American film based on the Marvel Comics superhero team of the Avengers, produced by Marvel Studios and distributed by Walt Disney Studios. The movie is a sequel to the 2018 Avengers: Infinity War, which left the universe in ruins. With the help of remaining allies, the Avengers assemble once more in order to undo Thanos' actions and restore order to the universe. Based upon votes by fans Top Nerd rates the greatest Marvel Avengers top 10 characters of all time in this order: Iron Man, Thor, Captain America, Spider-Man, Hulk, Black Widow, Wolverine, Black Panther, Scarlet Witch and Doctor Strange.

To date there are 22 movies in the "Marvel Cinematic Universe," most featuring just one of the superheroes. The first Avengers ensemble movie was in 2012, followed in 2015 by Avengers: Age of Ultron and in 2018 with Avengers: Infinity War.