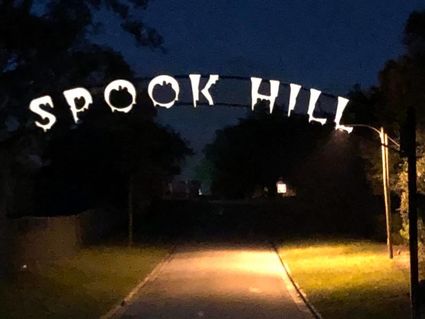 City Manager Ken Fields credited Nanek with persistence in seeking the special designation, which needed nomination by the State of Florida and then approval by the U.S. Department of the Interior. The National Register is the official list of the nation's historic places worthy of preservation.

Nanek said she would request funds in the 2019-20 City budget to purchase a special marker to showcase Spook Hill's recognition.

"It fascinates me how drawn to Spook Hill our tourists are," Nanek said. "Zero marketing dollars are spent on Spook Hill these days, well except the new signage lately, but it gets so much attention from press and visitors despite our minimal effort."

Spook Hill is a gravity hill, an optical illusion where cars appear to roll up the spooky hill. According to the Roadside America website, gravity hills – where cars inexplicably defy the laws of science - lurk in every region across America. It says Spook Hill is somewhat unique in that it's officially recognized by the town and prominently marked for uphill-rolling entertainment.

"The period of significance for Spook Hill is 1950-1969, starting in the year with the oldest recorded image of the site as a tourist attraction, and running through the mid-century period in which it had its greatest local prominence," according to the nomination written by Max Adriel Imberman, a historic preservationist with the Florida Division of Historical Resources. The creation of Spook Hill capitalized on the popularity of other area tourist attractions, including Bok Tower, Imberman noted: "While the seeds had been planted for a successful city, boosters wanted to make sure that there were visitors to bring in dollars, and Spook Hill was a significant local example."

Nanek worked 10 years at the Lake Wales Museum and said Spook Hill always was a top question from tourists and writers. She said the nomination describes "how Spook Hill has evolved over the years as part of our community's story the reader can see how important that site has been to our residents, business leaders, school children at Spook Hill and is a constant draw to tourists."

The City installed a new overhead sign at Spook Hill in July 2018. The sign describing Spook Hill has been changed several times over the years with the legend rewritten. 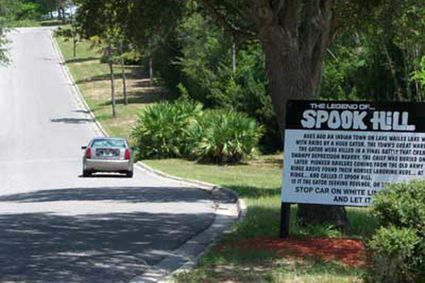 Here is how Imberman described Spook Hill: The southern end of the site is the beginning of a very shallow incline headed north along North Wales Drive, which changes to a high, steep incline ending at Burns Avenue. A white line is painted across the road at this point of transition, at which drivers are intended to park, put their car into neutral, and slowly roll backwards downhill while feeling like they are being pulled uphill. The optical illusion is caused by the view of the horizon being obscured by the high hill. The site is intended to be experienced facing north and is a one-way street.

The old negro parked his car here so he could go fishing. He looked back as he started for the lake and the smile on his face froze. His old jalopy was slowly moving back up hill with the motor not running. “Dem’s Spooks, cried the old man and fainted. That is how Spook Hill got its name.

NOTE: A local restaurant named Barney’s published a brochure that expanded on this story, relating a tale of a pirate, whose ghost supposedly moved the car because it was parked on his chest. Here is how that story goes: Captain Gimme Sarsaparilla was a bloody pirate captain who roamed the seas in the early 16th century. (It is reported that Tampa’s Jose Gasparilla was just an ordinary freebooter in comparison – a poor relation – second or third cousin – of the terrible Captain Gimme.) One day in the year 1511, Captain Sarsaparilla tired of the black pirate flag and came to Lake Wales to retire and lead the life of a gentleman. It is said that he wished to devote the remainder of his days to whale fishing. Only one pirate accompanied the terrible Captain to the Polk County Community. He was Gimme’s trusted aide, Teniente Vanilla – full name – Vincento Alfredo Nieto Isidoro Lima Llano Alvarez. When Alvarez died he was duly buried at the foot of what is now known as “SPOOK HILL.” In those peaceful days, there were no automobiles to disturb the final rest of a dead pirate. As to all men, death came finally to Captain Gimme. He is said to repose in Davy Jones’ locker at the bottom of North Lake Wailes. All was peace in the pirates’ afterworld until the old Negro stopped his car at the foot of the hill. It rested directly upon the chest of Teniente Vanilla. Now the weight of a car is said to approximate the weight of 16 dead men. Everyone knows that pirates have a particular aversion to “16 Men on a Dead Man’s Chest.” The ghost of Vanilla called for Sarsaparilla. The spirit of the old Captain arose from the depths of the Lake an pushed the old jalopy back up the hill – off the chest of the trustworthy Vanilla. Such has been the case ever since – every time a car stops at the bottom of “Spook Hill.”

Many years ago an Indian village on Lake Wales was plagued by raids of a huge gator. The chief, a great warrior, killed the gator in a battle that created a small lake. The chief was buried on the north side. Pioneer mail riders first discovered their horses laboring down hill, thus naming it “Spook Hill.” When the road was paved cars coasted up hill. Is this the gator seeking revenge, or is the chief still trying to protect his land??? Stop on white line. Take your car out of gear, and let it roll back.

Ages ago an Indian town on Lake Wailes Lake was plagued with raids by a huge gator. The town’s great warrior chief and the gator were killed in a final battle that created the huge swampy depression nearby. The chief was buried on its north side. Later pioneer haulers coming from the old Army trail atp the ridge above found their horses laboring here . . . at the foot of the ridge . . . and called it Spook Hill. Is it the gator seeking revenge, or the chief protecting his land?