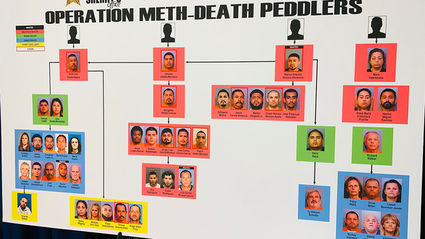 Lake Wales police joined officers from Bartow, Haines City and the Polk County Sheriff's Department as part of the Polk County High Intensity Drug Trafficking Area Task Force investigation that resulted in 44 arrests, three warrants and the seizure of 50 pounds of methamphetamines with a street value of $1.4 million. The task force also seized $50,000 in U.S. currency and assets along with four firearms.

According to the sheriff's department, the suspects were collectively charged with 85 felonies and 50 misdemeanors. They've been previously arrested and charged with a total of 392 felon...