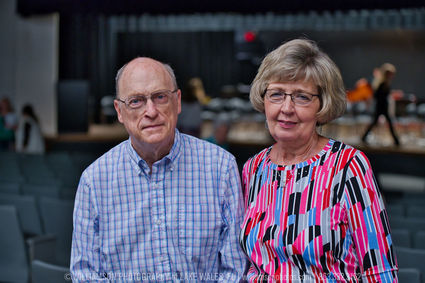 The Lake Wales High School orchestra, directed by teacher Meg Smith, performed a special concert for the event, closing with "You Raise Me Up," as a tribute to what Cowles and Crum do for others.

Howard Kay, a longtime academy volunteer and board member, praised the commitment of Cowles and Crum: "I never dreamed of all the families that could be helped by family literacy. You have no idea what these people do." He called them "the heart and soul of family literacy."

Kay called upon volunteers and staff to share memories of the program which in close to 14 years has served more than 1,000 adults and children. The academy offers day and evening programs that help families with reading and math so they can better support their children in school. The whole family comes together for a meal, tutoring and educational activities for children.

Social worker Lisa Spencer talked about the many ways Cowles and Crum support families, especially those who are having personal, financial or legal difficulties. She said Cowles calls the families regularly, offers encouragement and even loaned his car so she could transport a mom and three small children to classes. The academy has helped 95 parents obtain their GEDs (high school equivalency diplomas) and many have gone for further education, thanks to a partnership with Polk State College.

The Family Literacy Academy was founded in 2005 with a grant from the Barbara Bush Family Literacy Foundation. It subsequently has received support from Polk State College, Mountain Lake Service Corporation, United Way of Central Florida, the Dollar General Literacy Foundation and a wide range of other organizations and individuals. The academy focuses on four areas: adult education, education of children (the next generation), adults and children growing together, and life skills.

Kay pointed out that many of the adults must overcome significant barriers to complete their education, and the program also helps them build greater self-esteem. Some have gotten jobs they never believed they could have, like becoming teachers themselves. 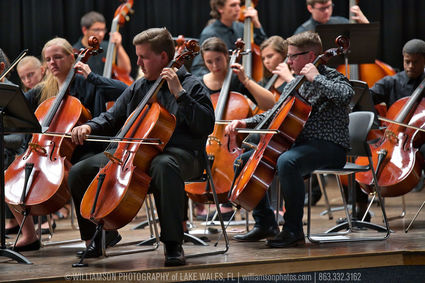 Lake Wales High School orchestra performs "You Lift Me Up"

Kay announced that the Family Literacy Academy will be recognized May 9 by the Lake Wales Area Chamber of Commerce and EDC as the Community Service Organization of the Year.

Crum and Cowles played down their roles and praised the many academy supporters and volunteers. Cowles called them "the best staff, best board, best volunteers in the world."

Crum said her 40-plus years teaching were special but her work with family literacy and Cowles has been most rewarding. "Dem does not believe in saying 'no' to anyone. He's taught me one thing – to believe in people, to never give up on them."

To see a gallery with more photos from the event by Williamson Photography of Lake Wales, go to https://www.lakewalesnews.net/photos/04_26_2019