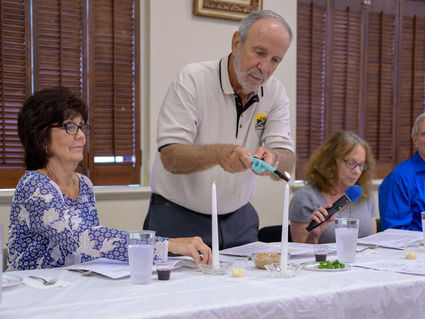 Unity in Community of Lake Wales gathered about 50 people April 18 for a traditional Passover seder.

Joyce Preston and Howard Kay guided the group through a ritual of prayers and responsive readings that brought to life the story of how God brought the Jewish people out of slavery in ancient Egypt and into their freedom as a nation under the leadership of Moses.

The UIC seder was held at First United Methodist Church of Lake Wales, bringing together Christians and Jews for the traditional celebration of Passover, which commemorates how the Jewish people marked their doorposts with sacrificial lamb's blood so the spirit of God would know to pass over their homes and spare their first born from a series of plagues.

"They did a phenomenal job," Kay said. "Everyone had a wonderful time."

The order and process of eating the foods, such as dipping the egg in salt water, breaking the matzah, and dotting the plate's edge with drops of wine, all represent elements of the Passover story. The wine drops represent tears of the people, while the matzah is unleavened bread that signifies faith and the lack of time to allow the bread to rise in their haste to leave Egypt. The horseradish is a bitter herb that symbolizes the bitterness of slavery, the egg signifies rebirth, and the apple paste represents the mortar that the slaves used while forced to work during their captivity. 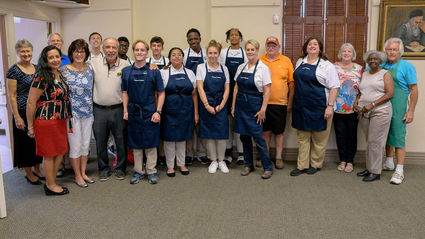 Kay said this is the 8th year UIC has hosted a seder, which some years has drawn upwards of 100 participants. He said he appreciates First Methodist pastor Jeff Kantz for hosting the annual event.

"Unity in Community is always looking for something to do for the community," Kay said. "We wanted to make the community aware of what Passover is all about."

Unity in Community was created nearly 20 years ago as a project of Leadership Lake Wales Class 4. The organization seeks to bring together people of all races, religions and backgrounds to foster better understanding and friendships.