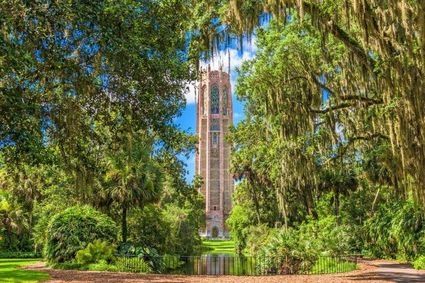 Bok Tower Gardens has finished third in a USA Today reader's choice poll of Best Botanical Gardens in the nation conducted by USA Today and 10best.com.

Bok Tower's famed Mountain Lake Sanctuary, actually older than the tower itself, was designed by the Olmsted landscape design firm. The term "landscape architecture" was coined by firm founder Frederick Law Olmsted, who was renowned for his designs of such landmark parks as New York's Central Park, the grounds of the US Capitol in Washington DC, the Niagara Reserve, North Carolina's Biltmore Estate, and Mount Royal Park in Montreal, Quebec. Olmsted died in 1903.

Olmsted's son, Frederick Law Olmsted Jr., designed and supervised the construction of the original Mountain Lake Sanctuary at Bok Tower Gardens in the 1920's, and at Bok's suggestion also contributed a long-neglected landscape plan for the original urbanized area of Lake Wales.

The gardens were nearly completed when Edward Bok decided that they needed a centerpiece, and hired the noted architect Milton B. Medary to design the soaring carillon tower as a visual exclamation point. Constructed of Florida coquina and Georgia marble, the tower was dedicated by President Calvin Coolidge in January, 1929. Tens of thousands of people attended the dedication. The tower's original 54-bell carillon has since been expanded to include 60 bells.