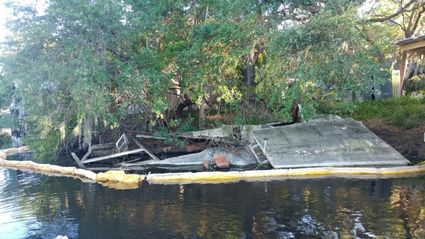 Under the watchful eye of a neighborly alligator, a team assembled by Keep Polk County Beautiful recently dismantled and carted off a derelict houseboat just outside the Camp Mack boat ramp on the Kissimmee River at Camp Lester. KPCB Executive Director Katie Yoxall said the eyesore had plagued the area for at least 17 years.

Yoxall said her organization doesn't really have the funds for derelict vessel removal, which can run thousands of dollars, but she was able to use a grant from the Florida's Natural Growers Foundation and labor from the Polk County Sheriff's Office Marine Unit and Polk County's Roads and Drainage crew, led by Loy Locke.

"I am so happy to report that through one day's hard work and labor, we were able to remove this houseboat and restore this area to its natural beauty," Yoxall said.

Nearby residents had reported the remains of the 39-foot houseboat and some came to watch as the crew used a Kaiser Spider to remove the large pile of debris. She said Darnell Waste Solutions gave them a discount on the dumpster and removal.

"We had a whole cheering section the entire time," Yoxall said, noting the alligator and a few turtles hung around during the entire all-day removal process.

Yoxall said this was the second derelict houseboat the group had been able to remove. The first was on the canal at Port Hatchineha and it too had its own resident gator, which climbed in and out of the wreckage while workers were attempting to dismantle it. 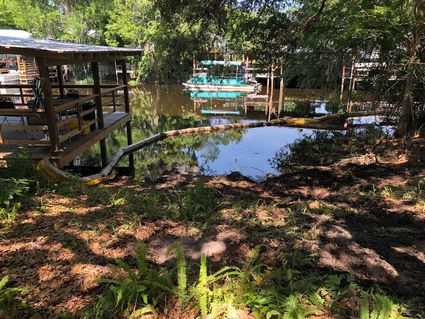 The Florida Fish and Wildlife Conservation Commission (FWC) this week announced the opportunity for state, county, municipal and other authorized governmental entities to apply for derelict vessel removal grants. The application period for the Bulk Derelict Vessel Removal Grant Program will begin on Monday May 6 and end on Wednesday June 19. Yoxall said KPCB has never been able to obtain an FWC grant, so the group demonstrated the need and got funding from the FNG Foundation.

To get an FWC grant, applicants must demonstrate proof that due process was provided for each vessel's owner. At a minimum, this would include an opportunity for the vessel owner to challenge the derelict vessel determination, either in criminal court or in an administrative hearing. Vessel cases not demonstrating that these opportunities have been offered to the owners of the vessels will not be considered for state funding assistance. The FWC has $1 million in its 2018-19 budget for derelict vessel removal.

Grant guidelines and an application form may be downloaded at: http://www.MyFWC.com/DVGrant. The FWC contact is Phil Horning at (850) 617-9540 or email [email protected]