Mayor, Commissioner Gibson Sworn in for Another Term 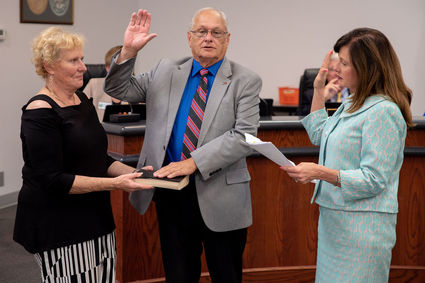 Goldstein was elected without opposition for a two-year term after Commissioner Tonya Stewart failed to qualify when her collection of signatures fell short.

With wife Shirley at his side, Goldstein was installed by state Rep. Melony Bell, who also swore in Mayor Eugene Fultz, who won re-election in April and will serve three more years. Several family members joined Fultz for the swearing in ceremony.

City Clerk Jennifer Nanek presented Stewart with a plaque and thanked her for her service. Stewart said she was honored to serve as a commissioner and felt after two years she was just really getting to fully understand her role. City voters in March also approved a charter amendment extending commission terms from two years to three, effective for the mayor this year and commissioners elected in 2020.

Commissioner Curtis Gibson thanked the citizens of Lake Wales for re-electing him, saying his receiving nearly 64 percent of the vote made him feel confident that people recognized how hard he has worked and how much he loves his hometown of Lake Wales. 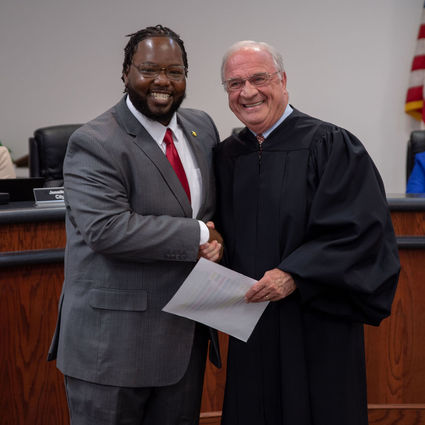 "In many areas I believe our city is on the right track. But I will continue asking questions and serving as a watchdog over city spending decisions," he said. "As we start working on next year's budget I hope we can reduce the tax millage rate and eliminate unnecessary spending. Also, I still believe we should do more to reach out to the community to identify their priorities."

Goldstein said he was looking forward to serving and would have more to say once he fully recovered from a recent illness. He did agree with Commissioner Curtis Gibson's expressed concerns that the city needed to put aside its differences with developer Ray Brown and support restoring historic buildings rather than destroying them. Fultz criticized Brown's track record restoring the Walesbilt Hotel, and said if he had financial backing for the Seminole he needed to show it.