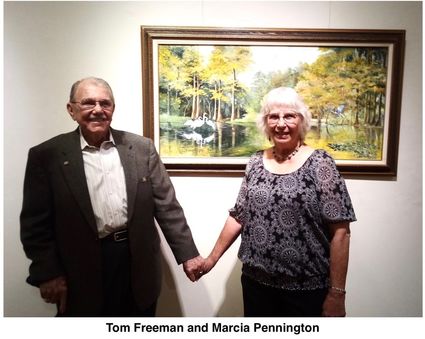 Melange Antiques and Art Gallery, at 250 East Park Avenue in Lake Wales, is proud to offer some very exciting and collectible new art. Recently, the ever-popular and prolific local artist, educator, and storyteller Tom Freeman, along with his good friend Marcia Pennington, have agreed to be artists in residence at Melange, so there will always be several works by each artist on permanent display in the showroom.

"We sold one of them less than an hour after the artists dropped them off," said Melange proprietor Linda Ann Truitt, "...and another one the very next day." At 93 years old, Tom and his equally talented friend have had two back to back exhibits together before "coming home" to the Gallery at Melange. "There are plenty of good pieces still available, but anyone interested in owning a painting by either artist should come in soon," says Truitt. "Not to worry too much, though. As we sell them, we will bring more in to replace them. There are plenty now, and both artists are still painting!"

Another exciting development at Melange is the recent consignment - from part time Winter Haven resident Matt Lein - of four highly collectible pieces by Florida Highwaymen artists Livingston Roberts and James Gibson. Matt bought one these pieces directly from the artist over 35 years ago. Having come from Fort Pierce, where the highwaymen began, Matt remembers seeing the artists around town, talking to them often, and getting to know their families. They always had art to sell. He remembers pulling over with a friend in 1982, when Livingston Roberts waved two of his paintings at his passing car from the side of the road. Matt's friend bought both of them, and Matt bought the one that was still on Roberts' easel. The paint was still wet. This is one of the four paintings, titled Pine Island, that is currently on display at Melange.

The other three, by James Gibson, were purchased by Matt's mother in 1964. They were painted on upson board, and date back to when the artists would construct frames from old door jams or other found wood materials. Matt inherited these paintings, with their original frames, from his mother.

Much has been written about the famed Florida Highwaymen, who hailed from the Fort Pierce area of Florida and formed in the late 1950s. A man by the name of Alfred Hair is credited with being the founder of the group, though he and his best friend and fellow artist, Livingston Roberts, had both started painting well before they met.

Another of the original highwaymen, Harold Newton, had been selling Florida landscape art from the trunk of his car since 1955, but Hair had the unique distinction of being under the tutelage of renowned Florida landscape painter, A. E. "Beanie" Backus. Backus was already an established and highly successful artist. He was not part of the Highwaymen, but had a huge influence on the growing group of African American painters.

With his friend Alfred, Livingston visited Backus often at his Fort Pierce studio. James Gibson also met Backus when he was 17, and worked with him to build frames or clean his studio. When Bean talked to a student about how to mix a color or think about a composition, James listened. Whatever they didn't learn directly from Backus, they would learn indirectly from Hair sharing his lessons. As the informal group added more artists, it was Al "Freddie" Hair who organized them into a painting production "factory."

Livingston Roberts was with his friend Al, or "Freddie" (as he was often called) one August night in 1970, at a local bar and juke joint, when a mutual acquaintance, in a jealous rage over the infidelity of his girlfriend, knocked Livingston off his bar stool with the butt of a gun, then shot and killed the young Freddie Hair. He was 29.

By now the success of the enterprise had been established as, at least, a far better source of income for these artists than most of what was available to them. The death of Alfred was a shock and a setback for the group, but, for the most part, they kept it together. They were still selling art at relatively low prices, and widespread interest in the group tapered off over the next few decades as consumer tastes changed. 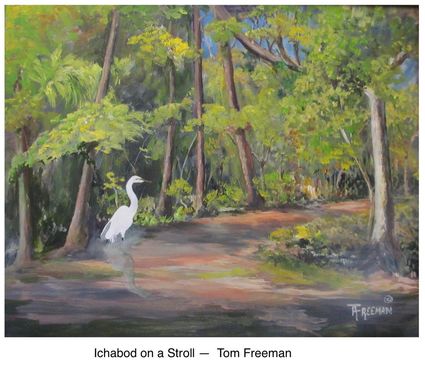 In the 1990s, an interest in "outsider art" developed in the art world. In 1995, a Sebring gallery owner and art collector, Jim Fitch, wrote an article for an arts journal in which he described the Fort Pierce-based artists as the "Florida Highwaymen," for their practice of traveling highways I-95 and A1A to sell their artwork from the trunks of their cars. Fitch's article was soon followed by an article in The New York Times which lauded the newly discovered Florida Highwaymen. Demand for the group's work soared.

Today, Florida Highwaymen paintings are widely sought by collectors all over the world. A group of the original Highwaymen are still active artists painting and selling their work. Several newer artists have been trained by the originals and added to the roster. The older pieces, by the original members, are, of course, much more valuable. 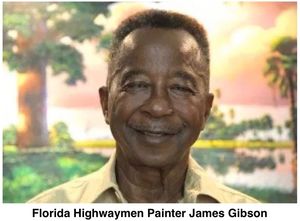 James Gibson was one of the most active Highwayman painters and perhaps the most successful. He consistently made a living selling landscapes and received numerous awards for his excellent paintings.

Born in Moore Haven, Florida in 1938, a fourth generation Floridian, James and his family moved to Fort Pierce when he was three or four years old. Before the highwaymen, he worked at a white Presbyterian Church where his family was very well liked. He also made money by taking the school bus with other children on Saturdays to pick tomatoes.

After high school, James was studying biology at Tennessee State University, but returned to Fort Pierce upon receiving a letter from Al Hair informing him of his success with painting. Hair invited Gibson to join the partnership saying that he could make more money as a painter of Florida landscapes. He continued painting until he died in 2017 at age 79. 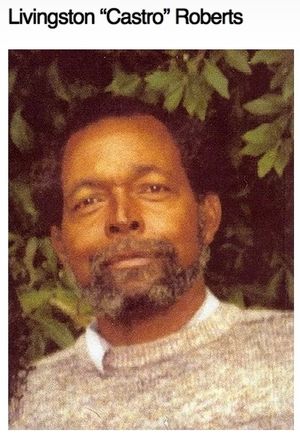 Livingston “Castro” Roberts was born in Elkton FL in 1942, and moved to Fort Pierce in 1957. He met Al Hair in 1961, when they were both 19 years old. To date, the Highwaymen, the original nine of whom included Al Hair, Livingston Roberts, Harold Newton, James Gibson, Roy McClendon, Mary Ann Carroll, Wille Daniels, Sam Newton, and Al “Blood” Black, have sold an estimated 200,000 paintings, mostly from cars parked along the side of US Hwy 1. All nine artists were inducted into the Florida Artists Hall of Fame by Governor Jeb Bush in 2004. Livingston Roberts also died that year.