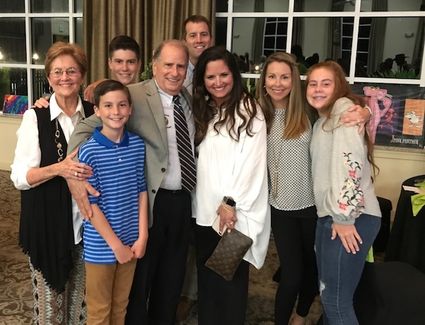 Citizen of the Year Jim Weaver celebrates with family

Longtime local attorney Jim Weaver was named Citizen of the Year Thursday, May 9 by the Lake Wales Area Chamber of Commerce and Economic Development Council.

Weaver was surrounded by his wife Kay and other family members after being surprised with the award at the end of the annual awards gala held at the Lake Ashton Country Club.

In presenting the award, last year's Citizen of the Year Linda Kimbrough cited not only Weaver's extensive community service and leadership but also his being a family man, a great father and grandfather.

"We are here to honor someone who is quite a community person," Kimbrough said. "They served our community well and also served out of Lake Wales."

Weaver said he was humbled by the award, especially after looking over the list of past recipients: "So many wonderful people who made such fabulous contributions to the city we love so much. A city you're invested in. A city where you raise your children, you have your friends, you belong to civic clubs, you see them in church and as a part of the fabric of the community."

Adding a light note to the presentation, Weaver spoke about being his daughter Elizabeth's Little League softball coach for nine years, working the concession stand and serving as an umpire.

"I can remember one night being hit by a purse. Bad call, Weaver. She was right," Weaver said, drawing audience laughter.

On a more serious note, he praised his friend Mayor Eugene Fultz for his service to Lake Wales and for helping the community not see color. Fultz and Weaver are both members of the Lake Wales Breakfast Rotary.

"What a fabulous honor it is to be a part of this community. Thank you, Lake Wales," Weaver closed.

Having begun his fourth decade of legal service in the Lake Wales area, Weaver says he most enjoys helping his clients with trust and estate planning, probate, real estate and business transactions. Jim has been recognized as an "AV" Preeminent Peer Review rated attorney since 1994.

In community life, Weaver served as president of both the Kiwanis Club and Breakfast Rotary Club, as well as a board member of Leadership Lake Wales. He also served on the Executive Committee of the Lake Wales Arts Council.

Weaver last year was named District 6890 Rotarian of the Year, recognized for spearheading international service projects in Honduras, including installation of a clean water system in La Danta and support for the Compelled by Christ home for abandoned, abused and neglected children in Choloma.

Professionally, Weaver is past President of the Heartland Estate Planning Council and was chosen to serve as Commissioner on the Charter Efficiency Commission for Polk County Government. He has served on the Trust Advisory Board of Citizens Bank & Trust and Cornerstone Hospice, and Help for the Homeless, a nonprofit organization that helps to feed the homeless community of the greater Orlando area.

Weaver says he enjoys spending time with wife Kay, their three children and 10 grandchildren. Jim's hobbies include fitness, singing in a capella and church choirs, and designing and making furniture in his workshop. 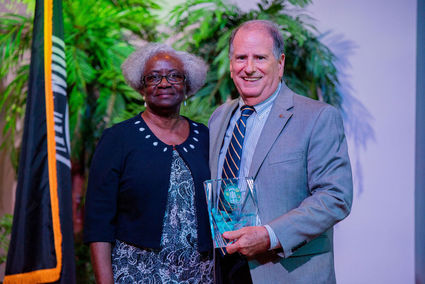 A distinguished Military Graduate of the University of Southern Mississippi, Weaver majored in public relations and minored in music with an emphasis in theatre, including two seasons of summer stock. He was president of his class and his fraternity and elected to Who's Who in American Colleges and Universities. Subsequently, he served as a U.S. Army Platoon Leader in support of the 11th Armored Calvary in Vietnam.

At Tulane University in New Orleans, Weaver did master's level work in music. Attending law school at the University of Georgia, Weaver served as a Justice on the Law School Honor Court. After law school, he joined a trial practice firm in downtown Atlanta. He started practicing law in Lake Wales in 1976.