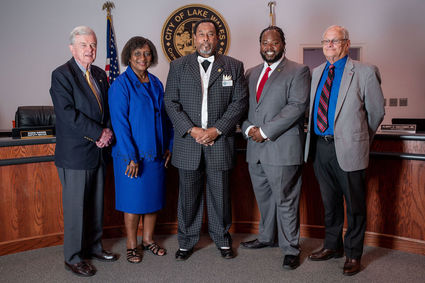 Lake Wales City Commissioners Tuesday, May 14 kicked off budget talks for the 2019-20 year by sharing their priorities and opinions with city staff.

There was clear consensus that the report from urban planners Dover Kohl, expected in mid-June, will drive spending decisions, particularly use of Community Redevelopment Agency trust funds. Vice Mayor Robin Gibson, who chairs the CRA, said he expects Park Avenue in historic downtown to be the top priority and to set the standard for future redevelopment.

Another priority that appeared to get traction was new Commissioner Al Goldstein's suggestion to raise salaries for the city's first responders – police officers and firefighters – which he said are not competitive and are causing the city to lose valuable employees. Fields pointed out that the city had to replace 36 of its 180 employees last year, indicating it is time to review all salaries to ensure they are competitive. A robust economy and expanded job opportunities are making it hard for the city to keep employees, especially those in specialized jobs, Fields said.

City Commissioner Curtis Gibson focused on capital improvement projects and called for striking or postponing unnecessary spending to ensure adequate resources for higher priorities. He said he doesn't believe the city needs a $780,000 public works building and he was glad the proposed $600,000 north library is off the table until at least the 2020-21 budget year. Gibson did get clarification that the $50,000 line item for a gazebo in the coming year actually could go toward a larger performance stage and restrooms at Lake Wailes Park. Mayor Eugene Fultz made a strong pitch for restrooms by the lake and supported a performance stage, which he said would be an investment since it would generate income from rental by groups hosting events. Fultz also expressed support for the North Library.

Noting the $702,000 in the CIP budget for T-hangars at the airport, Fultz said the commission needed to discuss further whether they want the city to fund building the hangars and leasing them, which would take years to pay off, or whether they support allowing private investors to pay for their own hangars, and eventually turn them over to the city.

Commissioners expressed optimism that with a healthy reserve and good budget year they may be able to lower the property tax millage rate, which is currently about $7.04 for every $1,000 of taxable property value. Concerned about a potential loss of state revenue should the Proposition 1 referendum win voter approval in the fall of 2018, commissioners held the rate steady for 2018-19. The referendum failed and commissioners said they would like to at least consider reducing to the "rollback rate," what it would take to generate the same amount of revenue as the prior year.

Between now and when the new city budget takes effect on Oct. 1 the Commission will hold at least two budget workshops and two public hearings. Budget workshops are planned for July 9, Aug. 13 and tentatively on Aug. 27. The Polk property appraiser is expected to estimate of the city's taxable value by June 1 and certify the preliminary tax roll by July 1.

City commissioners at their July 16 meeting are expected to adopt an interim property tax millage rate, which they may lower at their first public hearing Sept. 10 or final public hearing Sept. 24. They must notify the Property Appraiser and Tax Collector of their final approved tax rate by Sept. 27. The new budget takes effect Oct. 1.

One item in this year's budget that hasn't yet been spent is the $636,000 reserved for purchase of the Lake Wales YMCA. Fields said he plans to bring a negotiated contract for commissioners to discuss at a June 25 workshop. The city is planning to take ownership of the facilities and land, with YMCA staff continuing to operate it. Expenses for maintenance, insurance and renovations will need to go into the city budget for the coming year.