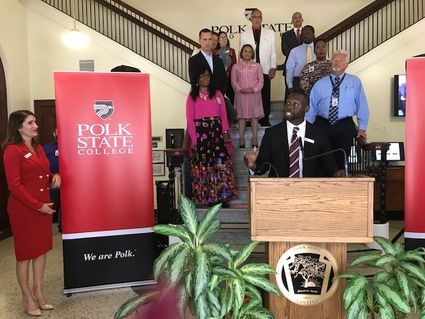 About 100 business and community leaders, elected officials and educators gathered Thursday morning, May 16, to rally support for continued funding of the Lake Wales J.D. Alexander Center of Polk State College.

Rather than include $2.5 million for the Lake Wales campus in its regular budget, the Florida Legislature placed it as a separate line item, making it subject to a potential veto by Gov. Ron DeSantis.

Polk State President Angela Garcia Falconetti reminded the crowd that the J.D. Alexander Center's impact locally and beyond is "transformational in the lives of our students and community."

She said last year the Lake Wales campus served 1,100 students, approximately 52 percent ethnically diverse, a majority Hispanic. She said the student body was 66 percent women, 20 percent of them 18-24 living at or below the poverty line.

"This is an area that clearly needs higher education," said Falconetti, noting the Center serves students not only from Lake Wales, but also Frostproof, Fort Meade and Babson Park. She said many can't afford a car or the time it takes to catch a bus to and from Winter Haven or Lakeland, because they have to work. "I like to think if you can make a difference one life at a time you're changing the whole trajectory of not only this area, but Polk County, the state and the country."

Falconetti said she is hopeful the governor will preserve funding for the Lake Wales campus. Polk State issued an alert last week asking community members to contact the governor and express support for its academic and workforce programs. Governor DeSantis' office may be reached by calling 850-717-9337 or writing to 400 S. Monroe Street Tallahassee, FL 32399 or http://www.flgov.com/email-the-governor.

Attending Thursday's rally was former Florida Sen. J.D. Alexander, who said he would be contacting the governor for support. Polk State in 2009 named the campus after Alexander in recognition of the role he played in obtaining the initial funding to bring a campus to Lake Wales

Polk State student and staff member Marcus Walker talked about the importance of Polk State to his family. He received his associate's degree and is working toward a bachelor's degree, his wife earned a degree in business administration and his daughter attended dual enrollment classes there her senior year of high school

Walker said having a campus in Lake Wales is motivating students to make better grades and start planning for a future that includes college.

"This challenges us as people to support something that's going to help the next generation," Walker said.

Lake Wales Mayor Eugene Fultz expressed the city's support for the center and spoke of its importance to the community: "We partner with Polk State College because we need to provide a nearby option for students of all ages to obtain a quality education."

Fultz said Polk State in Lake Wales is especially important because it helps students living below the poverty level wanting to better their situation by coming to college, by getting degrees and certificates so they can better their lives. He said, "For many in this part of the county the Lake Wales campus is the only affordable and reasonable located facility for them to be able to pursue an education and career advancement."

Fultz said the Polk State students also will be important to the city's efforts to revitalize downtown as they will eat, shop and enjoy nightlife coming to the area in the future.