Lovebugs Are Back to Bug Us 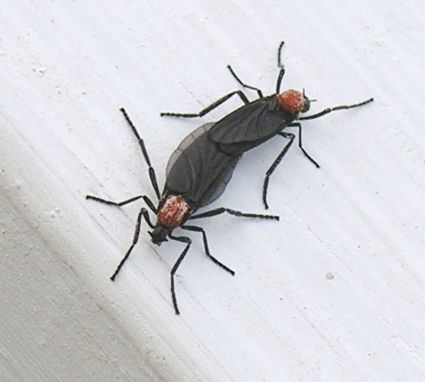 Lovebugs are especially annoying this year, not only splattering on moving vehicles but also making their way inside homes and offices.

According to Wikipedia, the lovebug is a species of march fly found in parts of Central America and the southeastern United States. It is also known as the honeymoon fly or double-headed bug. During and after mating, adult pairs remain coupled, even in flight, for up to several days.

Facebook is full of posts lamenting the twice annual invasion, usually May and September, and sharing tips for safely removing the bug parts from vehicles without hurting the finish. The most common suggestion is using a wet dryer sheet. Some people spray non-stick cooking spray or apply baby oil before heading out to the highway, with mixed results and the potential to streak paint.

Experts at the University of Florida (UF) say removing their remains within a couple of hours is important because their bodies and the female's egg sacs are especially acidic and can leave pits in a vehicle's paint or chrome. Soaking them with water for about five minutes also can loosen the remains for removal by scrubbing with a soft rag.

Lovebugs, technically plecia nearctica, were first described in 1940 by American entomologist D.E. Hardy, but reportedly seen in Louisiana as early as 1911. They made their way to Florida in 1949. Wikipedia says lovebugs are beneficial to humans because their larvae feed on partially decayed vegetation in the land and adults feed on nectar from various plants, particularly clover, goldenrod and Brazilian pepper.

Experts say female lovebugs can lay as many as 100 to 350 eggs, which hatch within two and four days, depending upon flight season. Their larvae feed on decaying material for 4-8 months. Once they reach adulthood, the male lovebugs hover around until females emerge. A male lovebug attaches to the female and begins copulation and may remain paired up for two to three days until the female has been fully fertilized. Sometimes larger males force a pair to uncouple by pushing out the competition.