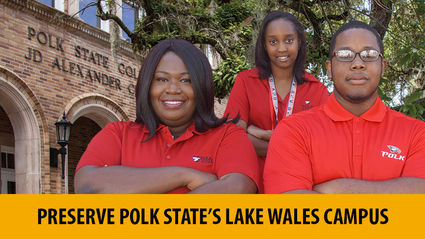 Lake Wales' busy downtown Alexander Center of Polk State College is again facing possible closure, according to College President Angela Garcia Falconetti. The crisis is due to the failure of the Legislature to include funds for the campus in the general budget. Instead they have once again been listed as a separate line item, tempting a gubernatorial veto of the funds.

"It is critical for the College to receive these funds," Falconetti said in a prepared statement. "For many in rural southeast Polk, the Lake Wales Campus is the only affordable and reasonably located facility for them to pursue higher education and career advancement."

College boosters have been critical of local representatives and senators who have failed to better shield the campus budget. The branch college is named in honor of former State Senator J.D. Alexander, who shepherded the original funding for the campus in 2009.

The Lake Wales campus has been at capacity since opening, and serves an average of 1,100 students, offering a variety of associate degrees, workforce baccalaureate degrees, and workforce certifications. Many of the students served come from rural areas of southeast Polk County, and have no affordable alternative for education. According to college officials, some students are able to walk to the Lake Wales campus, or take advantage of local bus service.

The Lake Wales campus previously lost all funding during the 2017 Legislative session, when it was also left as a single-line budget item and was vetoed by then-Governor Rick Scott. A last-minute effort during a special session restored funding for the central campus, but excluded the prosperous arts program that had been conducted at the Lake Wales Arts Center. Facing a complete shut-down of that facility, the college instead returned the building to the Lake Wales Arts Council, which is currently operating it.

Polk State has mounted an effort (See: "Polk State Needs Your Help!) to encourage area residents to reach out to Governor Ron DeSantis and urge him not to veto funds for the campus.