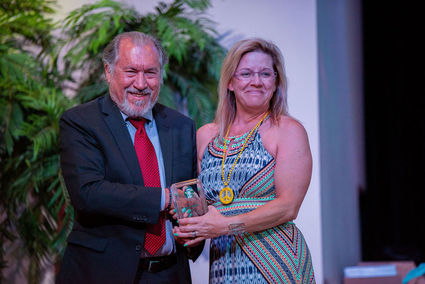 City Manager Ken Fields was named Public Servant of the Year at the May 9 Annual Awards Gala of the Lake Wales Area Chamber of Commerce and Economic Development Council.

The award was presented by last year's winner, Kathy Bangley, the city's director of planning and development. She said when she won the award she didn't realize she'd be presenting the next one to her boss. She cited his 30 plus years' experience in government and the private sector.

"To be a public servant is to work for the common good. It is the ability to imagine and articulate the public value that can be supported and embraced by the community," Bangley said. "Through his stewardship we find ourselves at the threshold of moving Lake Wales forward as a united community..."

Fields said "I just love Lake Wales. I just love what the staff is doing here, what the community is doing here. It's really the pinnacle of my career in terms of watching the community come together, saying we're going to roll up our sleeves and we're going to make this the best city to live in in Polk County, Central Florida and the whole state."

Recognizing the award on its Facebook page, the city listed some of his accomplishments over the past five years, which include:

• Began programming use of CRA funds for redevelopment of Downtown, initiation of a Master Plan for the Northwest District, incentive program for restaurants and food businesses in CRA area, and development of housing programs including affordable and elderly living facilities based on priorities of Main Street and Northwest Area Advisory Committee 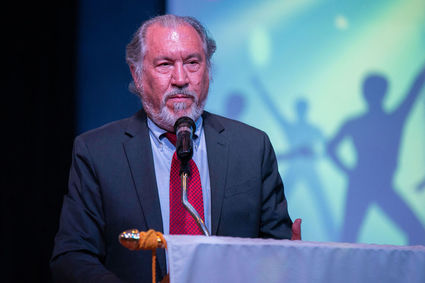 Fields has announced he likely will retire within three years. He has previously served as manager or assistant manager for the City of Hollywood, Islamorada, Village of Islands in the Florida Keys, and the Seminole Tribe of Florida.

He began his career in Pittsburgh, Pennsylvania where he served as Director of Budget and Research and Chief Labor Negotiator. He also worked in the private sector as a Management Consultant to state and local governments based in Washington DC and as the business administrator for a software research institute associated with Carnegie Mellon University in Pittsburgh. He is a member of both the International City/County Management Association and the Florida City and County Management Association.

Fields holds a Bachelor of Industrial Engineering from Cornell University and a Master of Science in Public Policy and Management from Carnegie Mellon University.