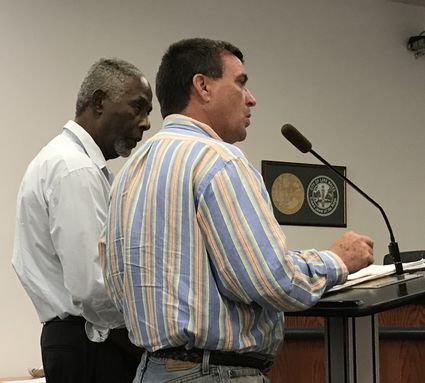 Developer Ray Brown took his frustration with city staff directly to the Lake Wales City Commission Tuesday May 21 and left the meeting with a commitment to at least discuss how to move forward his plans to restore the historic Seminole Hotel.

After some "he said, she said" banter that left commissioners expressing their own frustrations, City Planning and Development Director Kathy Bangley assured the commission "we will do everything to accommodate their team."

Vice Mayor Robin Gibson asked that a future meeting between Brown and Bangley be recorded and include Brown's partner, South Florida Architect Rick Gonzalez, via conference call if he's unable to attend in person. Commissioner Terrye Howell said to reduce the conflicting stories the city needs to put its demands in writing.

"It needs to be in writing so the target cannot move with the city or with him," said Howell, noting she believes only about half of what the city has said and half of Brown's version of recent events. "It needs to be written, not verbal, because a verbal message right now means nothing."

City Manager Ken Fields rejected Brown's request to have a city commissioner and a representative of the news media present at the meeting, saying that would be "inappropriate." He and Bangley repeatedly blamed Brown for any holdups saying Brown did not follow proper procedure, which included requesting a meeting with Bangley herself. They said he doesn't "respect" the city's process and should follow procedure rather than talk to commissioners and the news media.

"All we're asking is you respect the process of the City of Lake Wales and go through it the same way every other developer goes through the process," Bangley said. "If at such time you enter our process and you are unhappy with how you are treated in the process properly then maybe go to the press, but you have not given us with this project due respect of our process."

Brown detailed for commissioners the city staff he had met with and the liability waivers and building owner request for access he had submitted to Bangley's staff. He also asked that the city remove the trespass order he is currently under, which includes the threat of arrest.

"The reason I'm going public with this is because I was given a terrible run around, a terrible run around. It was after four or five runarounds I brought the press and the commission in because I knew the city had no intention, no intention of helping me," said Brown, who in recent years has been in conflict with city officials who have issued stop work orders and publicly criticized his progress in redeveloping the historic Walesbilt Hotel in downtown Lake Wales, two blocks south of the Seminole.

Current Seminole Hotel owner Cardiff Howell came Tuesday to verify his plans to sell to Brown, who has been granted only limited access in recent weeks. He had previously provided a notarized statement to the city, indicating his plans to sell and his request that Brown be given access to the building. Brown said if the city granted them full access to the building, Gonzalez and he could produce design drawings within 30 days and a full set of construction documents within 60 days. Gonzalez is vice chair of the Florida Historical Commission and has more than 30 years' experience restoring historic buildings.

After his recent visit to the Seminole, Gonzalez told lakewalesnews.net that with full city cooperation the hotel could potentially be restored and redeveloped into 30 small apartments by the end of the year. He said he plans to not only be the project architect, but also a financial backer. Brown pointed out that the city's urban planning consultants Dover Kohl have envisioned a restored Seminole providing much needed housing near downtown. Brown said a local leasing agent he is working with told him that in just the past 30 days she has been unable to find housing for 20 college students. Brown and Gonzalez believe the "microunits" they plan to develop would be attractive and affordable options for college students.

Bangley and Fields continued to resist full access to the condemned building and allowing Brown to remove the furniture, clothing and other debris left by tenants, which Brown said hamper their ability to fully inspect the property.

"The issue of removing things from the building could be problematic," Fields said, noting once the city determines "what their needs are, it can be arranged for them to be there on a regular basis to do what they have to do. When he says unlimited access I have a problem based upon prior history as to what exactly will be done during this inspection period."

Pointing out that three architects and even the city manager recently have declared the building "sound," Brown asked "Why spend $100,000 of the taxpayers' money to tear it down?"

But Fields said he is proceeding with getting bids to tear down the building: "The building is under a condemnation demolition order right now. That is not imminent tomorrow. It's not going to happen in the next week. We are out taking bids on it right now. If in fact Mr. Brown cannot commence work on that building in a timely manner it makes sense to demolish it. He has to be able to come up with a timetable and commit to it."

Commissioner Al Goldstein said an architect might be wasting his time putting together plans without the ability to clean out the building and obtain full access. He said with the proper liability waivers in place, the city should lift the trespass order, let the building be cleaned up and inspected: "This has gone on so long, too long. Let's get it over with and do it right."

Commissioner Curtis Gibson asked city officials to put aside their personal feelings about Brown and give him access to the building: "I want to be pro-business. I'm not a big fan of pushing people away. I don't care what kind of personal issues you have with somebody. If I'm going to work with you, I'm going to work with you because we need to do what's best for our city." 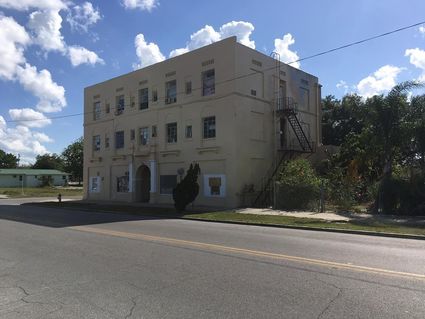 The Cardiff Howell Trust purchased the 14,000-square-foot Seminole Hotel in 2005 for $630,000. After numerous code violations and documentation of squalid living conditions, the city condemned the building in late 2017 and placed a lien on the property for administrative fines of $250 per day. Bangley said those fines now exceed $100,000 and would become the responsibility of any new owner. Brown has expressed optimism that with an approved redevelopment plan the city might consider waiving the fines.

Howell subsequently submitted a conceptual plan to redevelop the hotel, which the city rejected as not having enough detail. Brown said the plans he and Gonzalez will submit will cover the issues Howell's proposal did not, namely life safety, structural, electrical, plumbing, mechanical, roofing and all other required repairs.