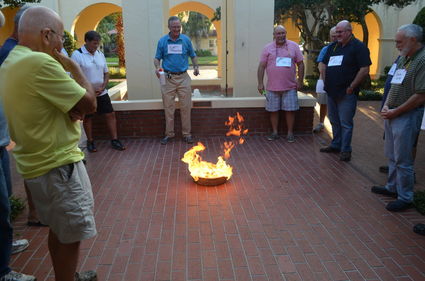 A team of Kairos Prison Ministry Weekend volunteers is headed to the Avon Park Correctional Institution to bring light into the darkness of prison during the annual event that begins Friday, May 25.

The mission of Kairos, a Greek word meaning in "God's Special Time" or in the "Fullness of Time," is to share the transforming love and forgiveness of Jesus Christ to impact the hearts and lives of incarcerated men, women and youth, as well as their families, to become loving and productive citizens of their communities.

The lasagna dinner meeting provided by past chair Barrett Nelson on Tuesday, May 7 at The Episcopal Church of the Good Shepherd was packed with interdenominational leaders from the Lake Wales area, Sebring, Winter Haven, Lakeland, Brandon and Bradenton who are volunteering for the 3 ½ day, 40-hour weekend.

"We practice the concept 'Listen, Listen, Love, Love,'" explains Curt Templeton, chair of the APCI advisory council, whose team won the most influential award out of 41 organizations that have programs. "We want to allow Christ to shine through us. We let inmates know that no matter who they are or what they have done, God forgives them. They are all worthy of God's love, light and grace."

In addition to messages of love, hope and forgiveness, Templeton delivers cookies and sandwiches from Fat Boys' BBQ. "A 6-foot-six Lake Wales inmate, "Six," said it was the first barbeque he had eaten in 27 years. Another said that's the best meal he had in 12 years."

Templeton avoided any leadership position for more than 30 years until Father Tom Seitz Jr. asked him to chair the council. "I couldn't say no to him. It's not been easy, but to see the inmates smile and laugh, and have a little sense of freedom makes it worth all the hard work. It's a real grind, but we don't get hung up on the small stuff and most of the stuff is small."

"I thought Kairos was a gimmick and I didn't want anything to do with God in my life," says Jim Ables, who was released from prison in 2000 after serving 26 years of a life sentence for first degree murder. When Templeton was his table leader during his first Kairos Weekend, he felt a glimmer of hope. "He told us that we are not alone and there are people out there who love us and want to support us. We heard that God is going to pursue us no matter how difficult we can be. I never knew the Lord when I was growing up and I thought I sure didn't think I needed him in prison."

Ables' turning point came after he wrote a 2-page list of all the people he hated and couldn't forgive that would be burnt in a fire outside. "I turned to walk away, and it was like something hit me. The weight of the world was lifted off me. It was a game changer. I told the Lord it didn't matter if I got out of prison because, at age 46, I was free for the first time in my life. I went there expecting nothing. I left with a new life."

Ables was told he would be on parole for the rest of his life, but that wasn't God's plan and he was taken off parole in 2011. "When I did my first Kairos in 2012, I told God I didn't want to go back in that prison. God told me: 'This is why I let you out.' That's why Kairos means so much to me. There are a lot of inmates who remember me and know my love for the Lord is real."

Originally called "Cursillo in Prison," the first three day "short course in Christianity" was inside Union Correctional Institution at Raiford, FL in 1976. The first Kairos Prison Ministry Weekend was presented in 1979. The lay-led, interdenominational, not-for-profit corporation was founded by "Nine Old Men," a group that included the late John Caldwell, a Lake Wales resident and member of Good Shepherd who wrote the original Kairos manual and was the first executive director.

"I met John back in the '90s when I was a priest in West Virginia," says Seitz, who has been involved at least 15 years. "He was like Johnny Appleseed planting Kairos throughout the country. He worked for donations and made a huge financial sacrifice. I'm so proud he was a member of our congregation.

"The first time you go into the prison it's scary, but I went in with a team. It isn't like it's all on my shoulders. The genius is that we are modeling the body of Christ. I trusted the promise that in serving them, that was where I could find Christ."

"This is my first year as a volunteer because I promised John Caldwell 30 years ago that I would do this and I'm just now getting around to it," says Rob Quam, Lake Wales Care Center executive director. "Invitations from friends motivated me and I've visited a lot of guys in jail and prisons for a couple of hours at a time, but I've never done a full weekend. I'm intrigued to see what that will be like."

"The most precious commodity I have is time and it's the most sacrificial thing any of us can give," says Keith Thompson. "This is a challenge because once you're in the prison, you're there. It really helps me understand the impact of time because those guys are doing time. The connection they have with the outside word is very limited and we get to sit around tables with them so it's quite an impact. I do it because it teaches me the value of my own time and I think it's something very sacrificial that God has called me to give."

"I do this to see God work more miracles," says Steve Knitter. "All we have to do is be there. God does all the work. It's a feeling of amazement to see the power and love of God to transform people."

"It's the most powerful thing I've ever experienced," says Jeff Kennedy, who has dedicated his life to Kairos for nearly si years. "It gives these guys a chance when they get out and gives them hope that they can have a new life. Jim Ables is a good example of how they can turn their lives around." 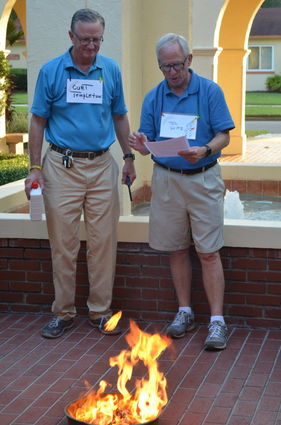 Every year, more than 30,000 volunteers conduct at least 600 weekends in prisons and communities in 37 U.S. states, and nine countries: Australia, Canada, Costa Rica, Dominican Republic, Nicaragua, Honduras, Peru, South Africa and the United Kingdom. Serving in nearly 500 locations, volunteers donate 3 million hours of service per year, to the tune of an annual dollar value of $36 million.

Each Kairos Weekend costs from $2-3,000. There is no cost for the prison or attendees.

Visit http://www.kairosprisonministry.org for information and to make online donations.