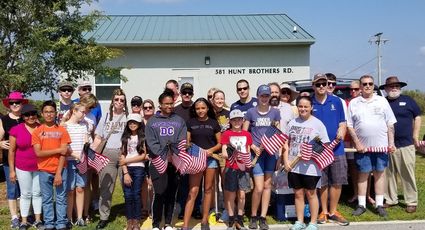 Memorial Day is about far more than beach outings and barbecues. Now students of Bok Academy in Lake Wales have a special understanding of what Memorial Day means, thanks in part to Lieutenant Colonel William Rumse, a veteran of what was then known as "the war to end all wars," which ended 100 years ago. A childhood neighbor of Bok Academy teacher Nicole Sealey, Rumse impressed upon her the significance of the day.

Sealey takes special pains to pass her appreciation to her 150 students. As a civics teacher at the south campus of the highly regarded school, she makes it a personal cause each year to teach about the sacrifices made in defense of freedom and democracy.

"I also bring in the blanket and papers that were given to me by my former neighbor. The kids are always fascinated by the handwriting and ancient onionskin requisition pages," Sealey said.

Many of her students gathered on Saturday and Sunday mornings to clean tombstones and place symbolic poppies on the graves of hundreds of military veterans at three local cemeteries. Most were joined by parents and grandparents, brothers and sisters, or other family members.

Felicia Dickenson, 14, an 8th grader from Lake Wales, had an aunt in the Navy, and both her grandfather and a cousin also served in the military. She remarked on what veterans had done for the country. "They sacrificed their lives for us."

In her classes Sealey also shares photos of the beautiful green meadows and rolling forests around Ypres before showing photos of the same place during the war: a hellish chaos of muddy trenches and shell-shattered trees.

The famous poem, "In Flanders' Fields," tells of the fields of poppies that grow "between the crosses, row on row." Written by Canadian physician Lieutenant-Colonel John McCrae, the poem is a moving testament to the fallen, and is analyzed by Sealey's students.

"Students learn about Dr. John McCrae, the tragedy of losing his former student at the second Battle of Ypres, the powerful symbolism of the poppy, and how it became the symbol of the sacrifice and tragedy of World War I," she said. Dr. McCrae was also killed shortly after writing the poem.

Mya Hanrahan, 14, said that she really appreciated the extra study unit. "It was great having us remember those who went to war, not knowing if they would survive to come back to their families." If they hadn't fought, she said, "my life would definitely be different. The world would be a lot more treacherous, with a lot more darkness. (Nicole) Sealey's a great teacher," adding that she believes the Memorial Day cemetery effort is a wonderful idea.

Hanrahan participated at two cemeteries on Sunday morning. "Anyone can come," Hanrahan added. "It's a simple thing to do, but it's very emotional in a way, it's not just putting something down, it's thanking them."

Seventh-grader Angel Collins, 13, also volunteered at both Willow Lawn and Memorial Gardens. Her grandfather and great grandfather both served in the military, in Vietnam and WWII respectively. She said that the class "made me honor them more and appreciate the sacrifices they made," adding "it was very well taught, and I learned a lot from it."

The students also learn about the original use of the poppies to raise funds to help the families of those lost in the trenches. "I give them each a poppy provided by the VFW," Sealey explained, "and they volunteer for the cemetery effort."

Students also study the Vietnam War, learning about how different that was. They learn about the Wall, a memorial that contains the names of almost every American killed during that long engagement. 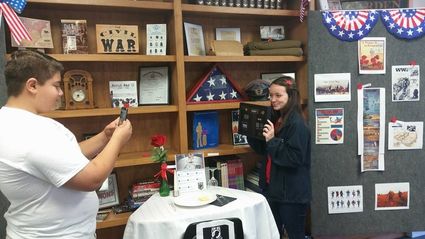 "They learn how people connect with the Wall in a way that no other monument has ever done," Sealey said. "I have rubbings that were brought back to me from DC. They were given to me by a former student who had been deeply impacted by this Memorial Day unit when he was in my class several years ago. They hold the names of these three boys from Lake Wales..."

"I show them a documentary on the items that have been left at the Wall, and we use that to inspire the students creatively," Sealey said. They also participate in a fund-raising effort in support of local veterans.

Students are then asked to create letters, poems, artwork, and inspiration to be displayed in the school's front office. "We couldn't do the display this year, because we have no front office!" Sealey said. Construction is nearly completed on a replacement for the original building, lost in last year's hurricane.