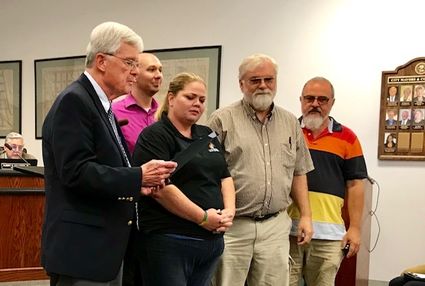 Lake Wales members of PFLAG were on hand to accept the proclamation. Local PFLAG leader David Jones said 60 percent of Floridians had human rights protections, but they are not in force in Polk County. He asked the city commission to consider adopting a local human rights ordinance to protect all citizens from discrimination. Commissioners did not respond to his request at Tuesday's meeting.

Here is the wording of the proclamation:

WHEREAS, Lake Wales, Florida, is part of a global community in which people of diverse cultures, races, creeds, genders and sexual identities must work together toward peace and understanding; and,

WHEREAS, the Lesbian, Gay, Bisexual and Transgender (LGBT) residents, students, city employees and business owners within Lake Wales contribute to this vibrant, innovative, culturally-inclusive, world-class community and to its diversity; and,

WHEREAS, various advancements have been made with respect to equal rights and protections for all peoples including the LGBT community throughout the State of Florida and the United States; and,

WHEREAS, members of the LGBT communities still face ongoing discrimination based on their innate status, resulting in immeasurable human tragedy, loss of life, community isolation and abuse; and,

WHEREAS, PFLAG of Polk County envisions a world where diversity is celebrated and all people are respected, valued, and affirmed inclusive of their sexual orientation, gender identity, and gender expression; and,

WHEREAS, the Lakeland Youth Alliance provides a safe space for LGBT youth and their straight allies of Polk County; and,

WHEREAS, to celebrate the richness and diversity of Lake Wales, PFLAG of Polk County and the Lakeland Youth Alliance, along with various community organizations, businesses and individuals will conduct various cultural, educational and entertainment activities in June, to focus attention on the importance of acceptance and respect for diversity among us.

NOW THEREFORE, the City Commission of the City of Lake Wales hereby proclaims June 8-15, 2019, as LGBTQ PRIDE WEEK in Lake Wales, Florida, in honor of freedom from prejudice and bias in any form, and in recognition and praise of those members of our community who constantly fight the battle for equal treatment for all citizens regardless of sexual orientation, gender identity, gender expression, race, color, creed, ethnic origin or religion.