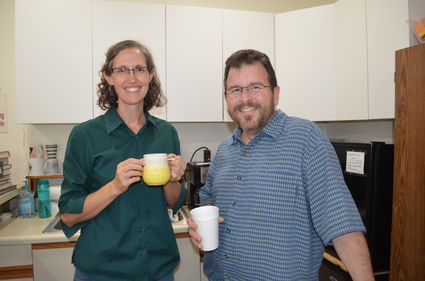 More than 30 volunteers, members and patrons enjoyed a buffet dinner during the Lake Wales Little Theatre's open house and annual meeting at Monday, June 3. In addition to good food and good friends, there was plenty of good news, including a sneak preview of productions planned for Season 42.

"We're thrilled to that all our board members except one agreed to remain on the board of directors," reports Leslie Grondin, LWLT president. "I started here 32 years ago as a child and am stepping down after serving for three years to help in the background with grants and fundraising. "It's a great experience and community involvement. You learn more about yourself acting through another character. Everyone's so artistic and fun and there's so much talent in Lake Wales that no one knows about. We just want everyone to come out and see what we're all about so they can help keep us going and growing."

"It's really the crown jewel of community theater," says Rob Fritz, former board member for 16 years, serving as president for five years. "It's a wonderful theater to be part of where there has always been a stress for quality. It's very family-oriented and friendly. Out of the four community theaters in Polk County, we're one of two with no paid staff that are operated solely by volunteers who do everything."

"I love the Lake Wales Little Theatre because it's like my home away from home," says Kara Wiseman, Youth Services Librarian.

"I have tried to be an actor, however I've found that octogenarian parts are few and hard to come by so when I audition I say I'm roughly 60 years old, give or take a few years," reveals Tom McCance, who not only starred in one of the plays last year, he served on the board and donated thousands of dollars. "I got to wear my plaid golfing pants in a production last year and I have to tell you, I was IT!"

"It's a great community of people and it's fun to be involved in projects," says Rhoda Butler, volunteer. "Every few months you have a new project, a new vision and a new fun reality you're creating."

The non-profit organization solely funded by donations and ticket sales was founded in 1978. The LWLT season begins in September and runs through June with five productions. Along with its Teen Theatre and the Out of The Box Improv Crew shows, Children's Theatre productions are held in September with the Adult Theatre's three plays in November, January and March/April. 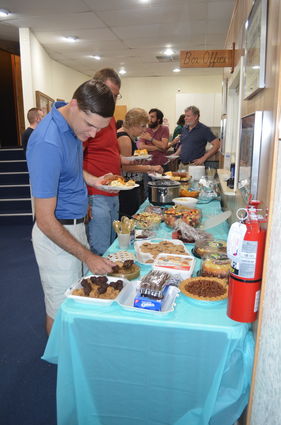 For the first 14 seasons, productions were presented in various local facilities. In 1992, the 15th season, the theater group proudly opened its intimate 140-seat theater at 411 N. Third St.

"If you would like to volunteer, please send an email with your name, contact information and area of interest to [email protected]," encourages Grondin. "We would greatly appreciate tax deductible donations and suggested levels are Friend ($25), Benefactor ($75), Adopt a Seat ($250) and Producing Angel ($1,500).

September 13-22, 2019: “If The Shoe Fits” By: Karen Woodford (Children’s Play with a special performance by the Theatre Tots)

Prince Owen is depressed. He’s ready to go to college and study computers (After all, the Kingdom of Kravitz is the only kingdom without a webpage!), but tradition dictates that he attend a ball in honor of his graduation and choose a bride. All the eligible girls in the kingdom will be there, including the Royal Fan Club. Will the prince marry Cinderella, who just wants to get away from her wicked stepmother’s house and study music? Or will the evil Valda, with the help of the Python Gang, successfully kidnap the prince and replace him with a mechanical duplicate? With a king who’s a stickler for tradition, a town crier who hates his job and a fairy godmother straight from the employment agency, this modern twist of an old favorite is sure to provide a rollicking good time for cast and audience alike. Produced by Pioneer Drama Service.

Carolyn has one evening to cook a three-course turkey dinner, make peace with her parents, get married in her grandmother's dress and hide the fact that she's in labor. What could possibly go wrong? Having Hope at Home is a side-splitting look at a family learning to love again. On a cold winter night, in a drafty farmhouse, Carolyn goes into labor just as her parents arrive for dinner. She can't tell them she's having a home birth, as her father is the head of gynecology at the local hospital. She has to pretend everything is normal including passing off the midwife as the vet. Good intentions dissolve as modern medicine meets midwifery in a torrent of family feuding over where this baby should be born. As tensions rise between the three stubborn generations of family members, so does the laughter. It takes some serious truth-telling and a baby's birth to heal the rift in this hilarious, heartwarming story of forgiveness and hope. A light comedy with serious intentions, the play shows us how the human heart sometimes takes the long way home. Produced by Dramatic Publishing.

Katy may live in a tiny trailer in an even tinier trailer park, but that does not stop her from having enormous dreams. A story of challenge, determination, grit, and hope, this new musical features a toe-tapping country/pop score. Single Wide will inspire you to reach for the stars and follow your dreams. Produced by Rebel Belle Publishing

Lois Lancaster is a big-city journalist writing about the current state of mental health facilities. Her research takes her to a hospital populated with a unique group of quirky inmates who imagine they are crime-fighting superheroes. Speed Freak thinks he can run at incredible speeds, while Dim Bulb, the most enthusiastic person on the face of the earth, thinks he has the ability to turn off lights with his brain. Mental thinks she can read minds, despite being prone to sudden outbursts of bizarre non-sequiturs. Kevin, much less quirky and flamboyant than the other inmates, doesn’t embarrass himself with a ridiculous code name or costume...at least, not initially. Dr. Gail Eisner appears to be a kindly hospital administrator, a steady influence needed to effectively run a madhouse like this one. At first Lois finds their elaborate superhero fantasies to be an entertaining diversion, the wild delusions of unstable minds, until something unusual happens that makes her wonder .... Easy to stage and insanely fun for cast and audiences alike. (This script is also available in a community theatre version entitled "Insane With Power." A one-act version is "Superhero Sanitarium.") Produced by Eldridge Publishing.

The one-liners and puns never end in this hilarious comedy! Everyone in town is eager for Shelby, a big-time country-music star, to arrive from Nashville to attend Uncle Roy’s memorial service. Hoping to convince Shelby to move home, get married, and have a family, Shelby’s mother sets her up on a blind date with Luke Duncan, a thrice-divorced ex-con who works at the local hardware store. Meanwhile, Shelby’s brother makes plans to leave the diner to pursue a singing career in Nashville, but no one has the heart to tell him he can’t sing including his friends, a Mr. Potato Head model and a mountain man/aspiring stand-up comedian. Then on the day of the memorial service, everyone discovers Uncle Roy was a bit of a womanizer when all his girlfriends show up wearing identical dresses, Uncle Roy’s secret son is revealed, and Uncle Roy arrives at his own memorial service in the form of a cake! Produced by Big Dog Publishing.