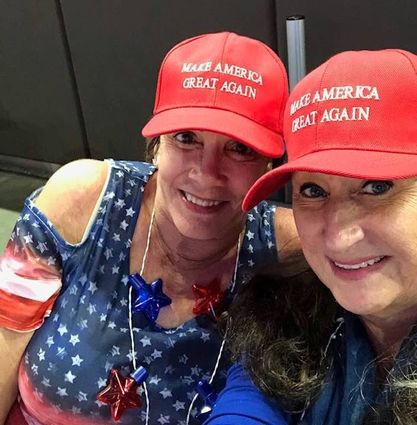 It was only 50 miles away but she and friend Teresa Burr from Winter Haven stayed at an Orlando hotel because of the long day planned. They woke up very early Tuesday and were in line at the Amway Center by 7 a.m., a full 13 hours before the president was scheduled to speak.

"It was my first rally and I didn't know what to expect," Tucker said. "It was all about the love of our country. President Trump truly cares for us as people and wants our country to succeed and be the best, to be number one."

Tucker said the focus on patriotism and faith was especially important to her and she liked when the crowd held hands during the opening prayer.

"I loved that Trump allows our party to be patriotic and to come across with Christian values," Tucker said. "That's important to me as a person and makes me even more proud to be a Republican."

Tucker said she is proud to support the president: "He truly loves this country. He's not in it for himself."

Although starting the day as strangers, many people connected and even shared food with others, Tucker said, noting she was "really impressed with the people and just the generosity of everyone, the kindness, the sharing. That's another thing that blew me away, that restored my soul that there are good people in this world."

Lake Wales resident Ron Jakeway said he was really happy to attend the historic rally: "It was exciting to be there for the announcement of his run for a second term."

He echoed Tucker's sentiment about the high energy event: "The Amway Arena was electric."

Jakeway said he was especially impressed with the speaking ability of Donald Trump Jr., who was part of the warmup program: "That guy's got it together."

A supporter of the president, Jakeway said: "They spoke the truth. There was no fake news from the stage. The economy is good and this is the way our country needs to keep it going."

Wearing her signature red, white and blue cowgirl hat, Lake Wales resident Kathryn "Kat" Gates-Skipper attended several Trump rallies in 2016 as the campaign's Florida chair for veterans. She's been a visible and vocal supporter ever since.

"Tuesday was just really, really exciting," Gates-Skipper said. "The energy was wonderful and everybody was just happy, happy, happy."

For Tuesday's kickoff, Gates-Skipper wore several other hats while serving as a rally volunteer, passing out signs, charging up the crowd in the holding areas and escorting VIPs like former legendary college football Coach Lou Holtz to a special reception hosted by Vice President Mike Pence.

She and other Trump supporters got up early Wednesday to be interviewed by Todd Piro on the Fox and Friends morning program.

"The highlight to me is first of all it was filled to capacity and there were so many people of all ages and ethnic backgrounds, that was wonderful to see," Gates-Skipper said. "It was like everybody coming together.

"To be with so many people who love our country and love our president, love the good Lord above. My people I'm with are just really patriotic," she said.

Gates-Skipper said she was really impressed with a teenager she met who wore a suit and politely addressed the adults with, "yes maam, no maam."

"It was so refreshing to see a relatively young person like that so excited and so into it," she said.

Gates-Skipper said she plans to work hard on fundraising to re-elect the president and hopes to bring him back for a visit to Polk County sometime during the campaign: "I definitely want to make sure our Polk County shines."

Trump took nearly 55 percent of the vote in Polk County in 2016, so a large contingent of supporters was expected to make the short trip to Orlando for the historical announcement. Florida is an important swing state, and the I-4 corridor is considered important for success. 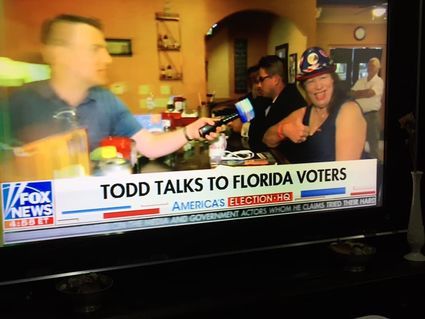 The news media entered the building about 3 p.m. and lakewalesnews.net saw few protesters prior to that time. The blazing heat and heavy rainstorms likely cut into some of the planned protests, but they didn't seem to dampen the enthusiasm of the Trump supporters. There were reportedly a couple of hundred protesters down the street from the Amway Center, where the "Trump baby balloon" was displayed along with handmade signs

EDITOR'S NOTE: Our news site seeks to cover the local angle to this story, leaving details and debate on the political content to the national pundits.