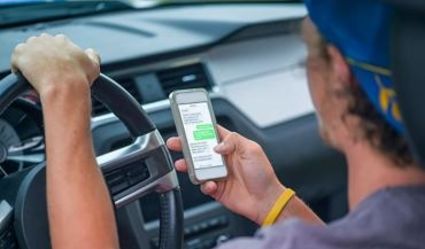 For those who text and drive, it's a good time to quit. A new Florida law goes into effect Monday, July 1 making texting while driving a primary offense.

Prior to the new law, officers could only cite drivers for texting if they were pulled over for another violation. The new law means officers can stop drivers they see texting. The texting ban does not apply to a driver using a navigation device or to a driver whose vehicle is stationary.

Lake Wales Police Chief Chris Velasquez said he fully supports the new law but his officers will spend the first few months of the ban concentrating on education: "Just taking your eyes off the road for a second or two can be tragic. It can happen in the blink of an eye."

Velasquez says most people can remember a scary time when they traveled down a road at 60 miles per hour and at the last minute saw a walker or bike rider that they almost hit.

"We have to be engaged when we're driving. We have to have our mind on what we're doing," Velasquez said.

The Legislature said the intent of the new law is to "improve roadway safety for all vehicle operators, vehicle passengers, bicyclists, pedestrians and road users." The law is intended to prevent crashes related to text messaging while driving and to reduce injuries, deaths, property damage and health care costs. The Legislature said banning texting also could reduce health insurance rates and automobile rates related to motor vehicle crashes.

"This law makes Florida roads safer and I am proud to give law enforcement the ability to more proactively enforce safe driving," said Governor Ron DeSantis. "Texting and driving is one of the most dangerous driving behaviors and it is every driver's responsibility to help ensure we all get home safely."

Texting related crashes are included in the distracted driving statistics, which also include tending to kids or passengers in the back seat, eating, watching an event outside of the vehicle, interacting with passengers, unsecured pets, putting on makeup or grooming, adjusting radio or climate controls, checking your GPS app or system and even daydreaming. Texting includes emailing and instant messaging.

"Distracted driving is extremely risky behavior that not only puts drivers and passengers in danger, but others out on the road as well," said Colonel Gene S. Spaulding, Director of the Florida Highway Patrol. "Focused attention on driving increases your reaction time to dangerous driving situations, helps to prevent crashes and saves lives."

According to FHP spokesperson Lt. Kim Montes drivers are allowed to hold the phone to talk while driving, everywhere but in a school or work zone, but using a hands-free device is recommended. If drivers use an ear bud or Bluetooth device they can only use it in one ear, she said.

The first offense is a non-moving traffic violation (no points) and a $30 fine. The second and subsequent offenses within 5 years are moving violations (3 points) and a $60 fine. The fine is per state statute; it does not include court costs or other fees imposed by the clerk of court. Warnings do not count against the driver's record.

Montes said police making a traffic stop are not allowed to ask for or take a driver's phone to see if they were texting, but officers are trained to identify and articulate when a driver is typing into a wireless device.

Starting October 1 wireless communications devices can only be used in a hands-free manner when driving in a designated school crossing, school zone, or active work zone area. Drivers will be issued warnings through December 31, 2019. Starting January 1 drivers will be cited for using any wireless communication devices in a handheld manner in a work zone or school zone. 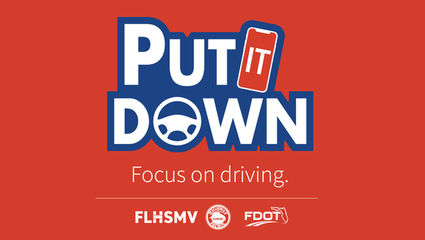 Polk County Sheriff's Public Information Officer Carrie Horstman said patrol deputies discuss new laws, training, and procedures each day in their roll call briefings and the supervisors who conduct those briefings will ensure the deputies know what to look for starting July 1. In addition to the regular road deputies, she said the sheriff's office has a very active traffic unit with over a dozen active and trained deputies certified in traffic enforcement.

The Florida Highway Patrol announced its troopers will issue warnings for texting and driving through December 31 to provide drivers with additional education of the new law. But they said exceptions would apply in extremely dangerous driving situations. Velasquez said his officers also will primarily issue warnings at first, but will issue citations in obviously dangerous driving situations.