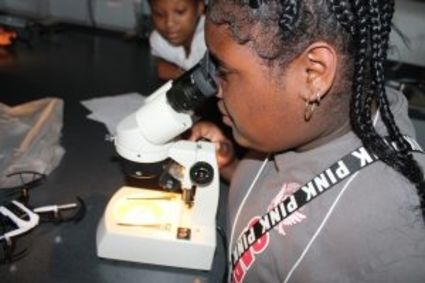 When you have a middle school science classroom full of about 30 incoming sixth graders, most people would not expect much productivity.

However, I recently saw these soon-to-be Edward W. Bok Academy students fully immerse themselves in the project brought to them by Keith Young, a scientist from Illinois. Mr. Young works with an organization called EcoTek, which is focused on bringing real-world issues to students interested in science.

He taught the students not only about the issue of Citrus Greening in Florida's orange groves but also the impacts and why they should care enough to work towards a solution.

I first met Mr. Young in the summer of 2016 when I was an incoming sophomore at Lake Wales High School. He presented to me and a group of my peers the same issue of an invasive species called the Asian citrus psyllid feeding on Florida's citrus. This insect leaves bacteria on citrus plants that causes a damaging disease called huanglongbing (HLB).

The group that I worked with that summer created the Citrus Greening Company in order to find effective methods of protecting Florida citrus and eventually getting rid of the citrus psyllid population. Now, Mr. Young has passed this company down to the younger generation of Lake Wales to continue with this research.

While the issue on the table is complex, Mr. Young's ability to grab the attention of his young class led to the students being actively engaged.

He began his class by demonstrating a quick experiment. He submerged his hand in a bowl of water with dish soap and balanced bubbles on his palm. He then lit the bubbles on fire, yet his hand was completely protected.

From there, he began to challenge the kids by asking them the simple question of "Why?" This required the students to think about the details of the experiment, such as the fact that Mr. Young washed his hands before the experiment, creating a barrier with the water.

As a result, the students were introduced to the scientific method and what an effective scientist does. According to Mr. Young, "Good scientists question everything". In the pursuit of finding solutions to Citrus Greening, the students did just that.

As they were introduced to the subject and possible solutions, they began to question not only the information they were given but also each other. This allowed for more in-depth thinking and proposed solutions that took different factors well into consideration.

As the students got deeper into the project, they began to work together in a more impactful manner. Some kids were more knowledgeable about technology, while others quickly picked up on the parts of a microscope. They were asking each other questions and teaching others about what they already knew.

It was impressive to see a large group of students that are so young able to work independently and passionately about such serious issue. At the beginning of the day, Mr. Young told them that "Science is what you do, but you have to think deeply about it". Essentially, this led to the students thinking about thinking, or metacognition.

Learning about the idea as a whole was the first part of thinking, but there was also the matter of why the information was relevant. They researched the anatomy of an orange, thought about the ideal composition of the fruit, and how to achieve that with the presence of citrus psyllids.

Mr. Young suggested the idea of growing oranges and other citrus hydroponically but had the kids come up with ideas of keeping psyllids out while protecting the other insects that contribute to the growth of citrus.

There were many great ideas, such as battery operated bug lights that emit blue light

since that is a color that citrus psyllids are attracted to. However, the students soon came to learn about limitations and the fact that other insects would also be attracted to the light.

This provided them with the perspective of the scientific process being long. There is no definite answer to the question of how to get rid of Asian citrus psyllids as of right now. Still, every solution and limitation that the students came up with was written down with the prospect of them eventually being able to come up with resolutions.

Mr. Young's use of hands-on activity allowed the students to think critically and use the learning process to come up with their own solutions to Citrus Greening.

Coming up with potential answers is not the only thing the young scientists at Bok Academy do. Back in 2016, a few students from the group that I worked with the thought of using drones to observe the condition of citrus trees in a more effective manner.

Mr. Young had the students go outside and learn how to fly a simple drone to expand upon that idea. Reinforcing the scientific process, he also discussed limitations with operating drones, such as inclement weather and short battery life.

The anticipation of flying drones generated even more excitement and curiosity of applying this skill in an actual orange grove to see firsthand what Citrus Greening looks like. Creating awareness of environmental issues among the younger generations contributes to the assurance that there will be future scientists prepared to take on these problems and generate beneficial solutions. That is the exact goal of Keith Young and those who work at EcoTek.

Citrus Greening is very prevalent in Florida, yet not many civilians actually know about it. It is necessary for these concerns to be introduced to students at such a young age to create the desire of being a part of the solution. The strong foundation of the STEM (Science Technology Engineering Math) program at Edward W. Bok Academy already allows students who have an interest in those areas to expand upon their knowledge. 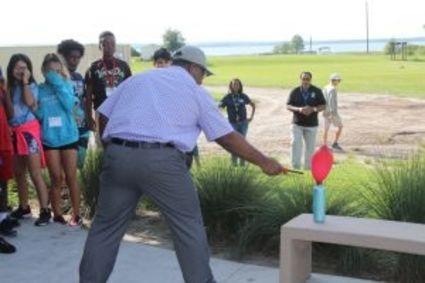 Over the years, this has attracted outside parties to build upon this program and cater to these students. Mr. Young said himself that he "...only works with one school in Florida – Bok Academy". He goes to the United Nations in New York once a year to present issues of scientific concern. With the promise of taking one kid from this group with him, this opens up a new world of possibility for this future Bok student.

With opportunities such as this for students, Bok Academy produces valedictorians, merit scholars, scientists of all kinds, and a long list of other reputable positions. From this group of sixth graders that Mr. Young is working with, Lake Wales will see even more of its youth contributing to concerns of relevance to society.