B Street Pavilion Dedicated in Memory of Albert Hawkins Jr.

Family and Friends of Albert Hawkins Jr. gathered Saturday, July 20 to honor his memory and dedicate a pavilion in his name. Hawkins died in December 2017 at the age of 79.

The pavilion is located next to the B Street Community Center in Lake Wales where Hawkins spent countless hours serving the community.

Alice Sanders coordinated the tributes to "Hawk," made by representatives of various churches, the Green and Gold Foundation, his Roosevelt High School Class of 1956 classmates, the City of Lake Wales and other groups.

Classmates Eddye Jean Rivers and Iba Lee Ford spoke of the importance of Hawkins returning to Lake Wales after he retired from public education in New Jersey. Rivers said so many classmates moved away and never came back, but Hawkins wanted to give back to his hometown.

"Hawk was very special to his class - 1956. He loved his class, he loved Lake Wales. He did all he could and I was so proud of him that he came back home," Rivers said.

Hawkins' son, Byron, who cut the pavilion ceremonial ribbon, said he recently retired and moved back to Lake Wales and he intends also to follow his father's example by getting involved and helping others.

"He loved his family, he loved his friends and he loved where he was from. That's why he came back and did what he did," he said.

Hawkins' sister, Delverna Hawkins Henry, said she was proud of her big brother for returning home and committing so much time to the education of young people. She was the youngest of nine children, all of whom were encouraged by their father to pursue further education. One of the people Albert Hawkins Sr. inspired to further his education was Clinton Horne, Hawk's classmate and best friend, nicknamed "Chick." The pair linked up with Polk County retired educator Jerome Mack and the three were instrumental in forming the Roosevelt Recreation and Social Club, and later the Green and Gold Foundation, a nonprofit that manages the B Street Community Center, which provides various education and enrichment programs. Hawk, Chick and Mack also were strong supporters of the Lake Wales Charter Schools.

Horne talked about the trio starting an afterschool program at the Walker Building, before the B Street Center was built by the city. The full story and more details about their work is available online at http://bstreetcommunitycenter.org/blog

Sanders said Hawk donated generously to many local causes. Whenever she went to him with a need, he pulled out his checkbook, she said. 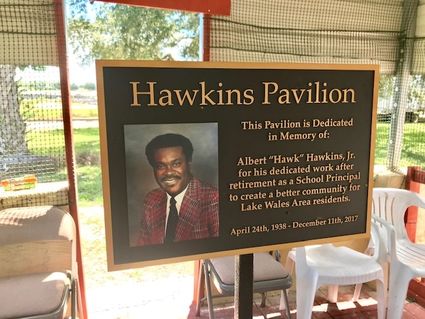 City Commissioner Terrye Howell said Hawkins supported her politically but just asked her to do the right thing for the community and its children. "He wanted Lake Wales better. I think a lot of our mission here in Lake Wales should be to do what you can do for the children," Howell said. "I appreciate him for just being a big presence here in our community."

Hawkins was an active member and elder at Allen Temple A.M.E. Church in Lake Wales, but he was supportive of other churches throughout the community.

Community Baptist Church member Barry Jackson said Hawkins supported the church meeting at the B Street Center and for 10 years helped with the church's free community breakfasts, the first Saturday of each month. The next one will Aug. 3 starting at 9 a.m. and the same morning the B Street Center will be giving away free school supplies.

The pavilion dedication crowd moved inside for a barbecue lunch and to share more memories of Albert Hawkins Jr., the man they came to honor.