Planner Shares Revised "City in a Garden" Vision for Redevelopment 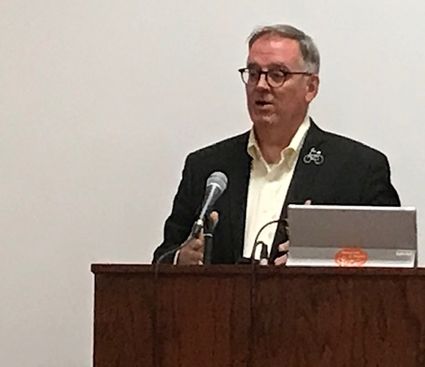 Urban planner Victor Dover was man of the hour Tuesday, receiving applause and high praise after presenting a draft Lake Wales Connected plan for redevelopment of the city's downtown and northwest business district.

About 75 interested persons, including numerous downtown merchants and community business leaders, listened attentively as Dover described the potential to turn Lake Wales into a popular destination, returning to city founders' concept of a city in a garden, as designed about 100 years ago by the Olmsted Brothers, who also designed the garden landscape at Bok Tower and the Mountain Lake community.

"Their idea is a city should be living and vital and growing and green. Their idea was the beauty of the city itself should be an attraction. They realized the city as a garden, the city as a work of art would draw people," Dover said.

Renderings of proposed redeveloped areas included many additional trees, prompting one citizen, Charlene Bennett, to suggest that the city hire an arborist and that the report include more detail about the benefits of trees. Landscaping with trees and flowering plants also were important components of an expanded downtown marketplace town square, linear parks and traffic roundabouts at intersections of Scenic Highway at Crystal Avenue and Burns Avenue. The plan also calls for expanded nightlife, on-street dining, special events, bike paths, walkable areas and more downtown housing.

The only significant question concerned the reduction of parking spaces on Park and Stuart avenues, if the current one-way streets were changed to two-way traffic with parallel parking spaces on only one side of each street. Attorney Jim Weaver said his clients already complain about a lack of close parking to his Park Avenue office, and parallel parking might be difficult for them.

City Manager Ken Fields said some behavioral changes may be necessary, including merchants and their employees parking further away to leave close-in spaces for customers.

Dover shared highlights from his latest 100-plus-page draft, noting he would incorporate recommendations from the Aug. 14 meeting into the next version, which would be ready sometime in September. He said he ultimately will provide a final "Neighborhood Plan for the Core of Lake Wales" for adoption by the city commission, broken into two sections – one for the historic downtown and one for the northwest business district.

A key element of the plan, considered an important link between downtown and the northwest business district, is the proposed redevelopment of the 140-unit low-income Grove Manor housing complex west of First Street. The 2019-20 proposed city budget includes $50,000 to support the Lake Wales Housing Authority's grant request to re-build Grove Manor into a mixed-use development, not just for low income residents.

Dover recommended the downtown revitalization start with Park Avenue, a manageable project that can serve as a "symbol of the comeback of downtown." Fields told commissioners that Community Redevelopment Agency funds are available to get the redevelopment started in the next budget year, which begins Oct. 1.

Through its Community Redevelopment Agency the city committed $95,000 to fund the study to match $93,940 from private sources generated by the Lake Wales MainStreet organization. Dover, Kohl & Partners started the process with a January mixer and spent a week in Lake Wales in April holding community meetings and obtaining public input. Their consulting team includes urban designers, town planners, and architects as well as an economist and traffic engineer.

MainStreet new President Ryan Buskirk and outgoing President Rusty Ingley praised the consultants and expressed strong support for implementing the plan. Ellis Hunt Jr. said he asked to join the MainStreet Board after seeing the energy and enthusiasm generated at the project kickoff.

"We're very excited about it and we're 150 percent behind it," Ingley said.

Bok Tower President David Price said the report is exciting and includes big ideas that have been successfully adopted by other communities. He encouraged expanding the plan to include more details about parks. Catherine Price also asked for a closer look at the bikeways and how they can be used to connect various parts of the community. 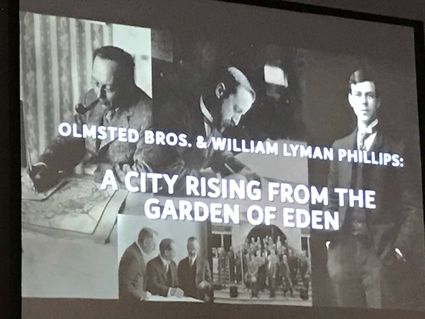 Plan recommendations fall into five ideas: 1) Design – Moving Quality Design to Top Priority, 2) Activate – Attract the community back to the Core, 3) Connect – Joining Neighborhoods and Parks, 4) Populate – Residences in the core support revitalization, and 5) Empower – Make it easy to implement the vision.

The study also includes a draft action plan to implement recommendations – things that could be done in the near-term years 1-3, mid-term years 4-6 and longer-term 7 years and beyond. The recommended actions include ballpark cost ranges and potential funding sources.