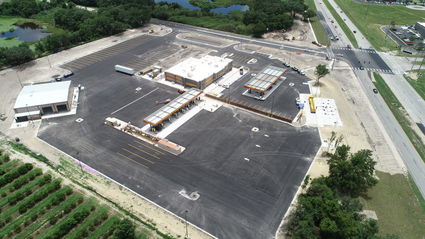 Truck drivers and other travelers on U.S. 27 in south Lake Wales will have a new place to eat, get fuel, service, rest and hot showers 24 hours a day as the new Love's Travel Stop opens Thursday, Aug. 29.

The store at the intersection of U.S. 27 and Hunt Brothers Road will house a Subway, Godfather's Pizza and Chester's Chicken and employ an estimated 50-60 people.

Headquartered in Oklahoma City, Love's has more than 490 stores in 41 states, including 16 others in Florida. The Lake Wales store will have 68 truck parking spaces, tire care and seven diesel bays.

The Love's operation sits on a 10-plus acre parcel across U.S. 27 from the entrance to the Lake Wales Commerce and Technology Park, formerly called Longleaf Business Park. A new traffic signal recently became operational, and other improvements were made to the intersection.

An official grand opening ribbon cutting will be held at a later date.